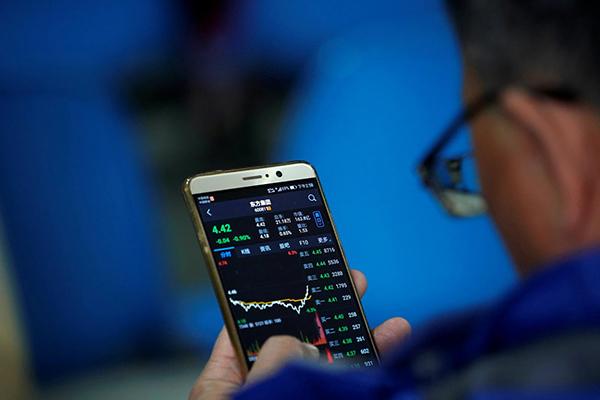 Late Tuesday, the PBOC unexpectedly announced it would cut the cash banks hold as reserves in a move that frees up lending for small firms but falls short of a broad monetary easing.

The Shanghai index had hit a near one-year low after the United States banned American companies from selling components to Chinese telecom equipment maker ZTE Corp.

E-Mini futures for the S&P 500 gained 0.1 percent after robust earnings from Netflix, Goldman Sachs and healthcare companies fueled optimism about what is expected to be the strongest earnings season in seven years.

Yet there were signs of caution in the latest BofA Merrill Lynch survey of fund mangers which found investors squirreling more funds away into cash, while cutting their equity allocation to an 18-month low.

The outlook for the global economy also darkened with just a net 5 percent expecting stronger growth in the next 12 months – the lowest since the United Kingdom voted to leave the EU in June 2016.

While the IMF on Tuesday left its global growth forecasts unchanged for 2018 and 2019, it judged medium-term risks were to the downside – citing financial vulnerabilities, geopolitical strains and tariffs.

“The global narrative has quickly shifted from synchronous global growth, upgraded growth and glimmers of inflation in early 2018 to a focus on tariffs and protectionist rhetoric,” said Robert Rennie, head of financial markets strategy at Westpac.

“We ultimately believe that we will see a negotiated solution, but there is still a long way to go and further bouts of volatility and headline risk seem assured.”

Worries about the longevity of the U.S. economic expansion were one reason the Treasury curve was at its flattest in a decade and why some interest-rate curves were starting to price in rate cuts for 2020.

The air of uncertainty was keeping currencies restrained.

The dollar did nudge modestly higher on the yen to 107.25, helped by signs of progress in U.S. talks with North Korea.