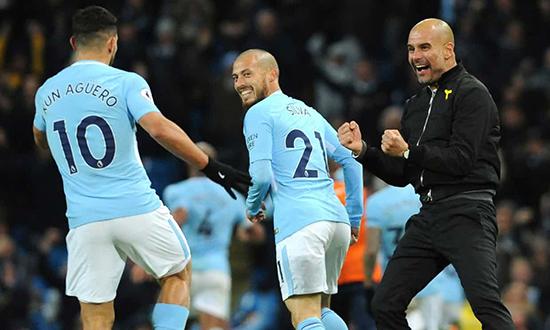 Five Manchester City players have been named in the Professional Footballers’ Association Premier League Team of the Year.

Having been confirmed as champions on Sunday after second-placed Manchester United lost 1-0 to West Bromwich Albion, the Etihad celebrations continue with the choice, by their fellow professionals, of defenders Nicolás Otamendi and Kyle Walker, midfielders Kevin de Bruyne and David Silva and forward Sergio Agüero as part of a three-man attack.

Completing the line-up, and despite last season’s champions’ disappointing title defence, Chelsea left-back Marcos Alonso was named in a team he failed to make last year when losing out to Tottenham’s Danny Rose. Alonso held off strong competition from left-backs such as Liverpool’s Andy Robertson and Tottenham’s Ben Davies.

On Sunday, the overall winner of the PFA Player of the Year award will be unveiled, with De Bruyne, De Gea, Kane, Silva and Salah all nominated, along with City winger Leroy Sané, surprisingly omitted from the Team of the Year.

Wolves will be playing Premier League football next season after securing promotion, and have three players in the PFA’s Championship team of the year. Goalkeeper John Ruddy, defender Willy Boly and midfielder Ruben Neves, who scored a memorable goal in the recent win over Derby, all make the XI.

The battle to join them in the top-flight next season looks set to go down to the wire. Fulham head into the weekend’s matches in third place, just a point behind Cardiff, on the back of an impressive 21-match unbeaten Championship run.

The Cottagers see defender Ryan Fredericks and wing-back Ryan Sessegnon, who has scored 14 goals so far, named in the PFA Championship team of the year, along with midfielder Tom Cairney.

Exciting Fulham prospect Sessegnon, 17, is also included on the shortlist for the PFA young player of the year award.

Championship Team of the Year

League One Team of the Year

League Two Team of the Year