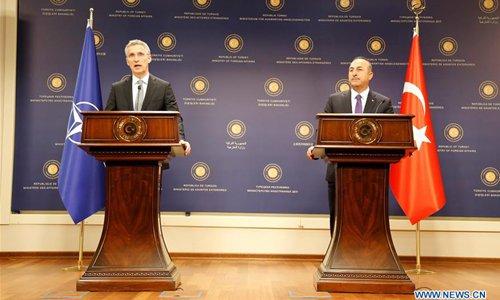 NATO Secretary General Jens Stoltenberg on Monday called on Turkey to contribute to the alliance’s plan to launch a training mission in Iraq to fight terrorism.

Stoltenberg met Turkish leaders in Ankara on Monday, underlining the alliance’s support to Turkey which he identified as “a highly valued and key ally for many reasons.”

“At a NATO summit in July, we plan to launch a training mission in Iraq to help local forces to stabilize their own country and prevent international terrorist threats like the Islamic State (IS) from coming back,” he said at a press conference with Turkish Foreign Minister Mevlut Cavusoglu.

This year’s NATO summit will be held on July 11-12 in Brussels, Belgium to underpin the strong bond, solidarity and unity among its members, and further strengthen NATO’s adaptation.

Stoltenberg hailed the “essential contributions” that Turkey has been making to fight IS, citing Turkish government’s role in Afghanistan for building stability, as well as its contributions to NATO missions in Kosovo and Iraq.

“I count on Turkey’s support to launch the mission,” he noted, “No other NATO ally has suffered as many terrorist attacks as Turkey. You are the ally most exposed to stability in this region.”

The NATO head also stressed that there is no military solution to the Syrian conflict. “NATO fully supports efforts led by the UN to achieve a lasting political solution to the conflict in Syria,” he said.

Cavusoglu said Turkey will continue NATO’s missions abroad. “We expect important decisions to be taken at the NATO summit,” he said.

He added that Turkey expected NATO to meet its expectations on the issue of air defense, referring to the ongoing NATO mission in southeast Turkey to protect the Turkish border from threats from Syria.

Spain and Italy have deployed air defense systems along Turkey’s border with Syria, after the US and Germany pulled out their Patriot Air and missile defense systems.

The NATO chief’s visit to Ankara comes at a moment when Turkey’s relationship with the US-led Western countries has been strained due to Turkey’s crackdown on political dissidents following a failed coup in 2016 and the recent Turkish military operations inside Syria to fight the Kurdish militia.

Turkey, meanwhile, has developed close ties with Russia, particularly over cooperation on the issue of Syrian crisis, amid rising tensions between Moscow and the West.