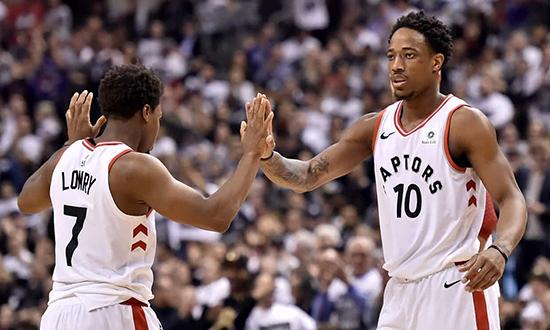 DeMar DeRozan matched his career playoff high with 37 points, Jonas Valanciunas had 19 points and 14 rebounds and the Toronto Raptors beat the Washington Wizards 130-119 on Tuesday night, taking a 2-0 lead in a playoff series for the first time in franchise history.

Kyle Lowry had 13 points and a career playoff-high 12 assists as Toronto set team playoff records for points in a quarter, a half, and a game.

Toronto, which made a team playoff record 16 three-pointers Saturday, connected on 12 of 32 from long range in Game 2, making only one in the second half.

John Wall scored 29 points, Mike Scott had 20 and Ty Lawson 14 for the Wizards, who host Game 3 on Friday night.

Wizards guard Bradley Beal missed eight of 11 shots and finished with nine points. Beal had more fouls in the first half (three) than made baskets (two).

Miles stopped the run with a long three, Toronto’s only one of the second half, and the Raptors put it away with a 17-4 spurt over the next four minutes. The sellout crowd roared when DeRozan forced a turnover and saved the ball from going out of bounds, then passed to Lowry who fed Wright for an alley-oop dunk with 3:38 left, putting Toronto up 125-107.

Raptors guard Fred VanVleet returned after sitting out Game 1 because of a bruised right shoulder, but looked rusty in three minutes of action at the start of the second quarter, airballing a shot and mishandling a pass before being replaced by Lowry. VanVleet did not play in the second half.

Toronto set a team playoff record with 44 points in the first quarter, including 13 from DeRozan, and led 44-27 after one. All five starters made at least one 3-pointer as the Raptors shot 7 for 13 from long range. Washington coach Scott Brooks called two timeouts to try and slow Toronto, to little effect, while Wizards guards Wall and Beal each picked up two early fouls, forcing them to the bench.

Miles made three three-pointers and scored 11 points in the second and DeRozan added seven as Toronto broke its playoff record for points in a half by taking a 76-58 lead at halftime.

Wall scored 14 points in the third while Toronto shot 0 for 7 from 3-point range, allowing the Wizards to cut it to 100-90 heading to the fourth.

Jaylen Brown had a playoff career-high 30 points and the Boston Celtics pulled away into second half to earn a 120-106 win over the Milwaukee Bucks on Tuesday night.

Terry Rozier added 23 points for Boston, which took a 2-0 series lead in the first-round matchup. Game 3 is set for Friday in Milwaukee.

The Celtics led by as many as 20 in the fourth quarter.

Turnovers were an issue for the second straight game for Milwaukee. The Bucks finished with 15, leading to 21 Boston points. They also shot just 41 percent from the free-throw line (7 of 17).

Boston led by as many as 13 in the first half, taking advantage of 10 Milwaukee turnovers.

Antetokounmpo scored 18 points in the opening 24 minutes. He had his way on the inside, connecting on 8 of his 9 shots from the field.