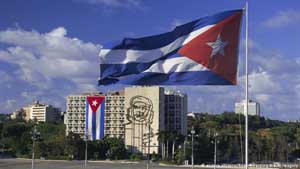 Analysts say little will change as Miguel Diaz-Canel is expected to take over the presidency in Cuba. The country’s economy is in desperate need of reform and US-Cuba relations are on the rocks after a brief honeymoon.

It has been nearly 60 years since Fidel and Raul Castro descended from the Sierra Maestra mountains with a band of communist guerrillas to oust US-backed authoritarian President Fulgencio Batista.

Since then, Cubans have known nothing but the Castros at the helm of power in a one-party communist state. Fidel handed over the presidency to his brother Raul in 2008, who has held the reins of government ever since. That is likely to change on April 19, when Vice President Miguel Diaz-Canel, 57, is widely tapped to assume the presidency as 86-year-old Raul steps down.

A trained engineer who worked his way up the party apparatus, Diaz-Canel would become the first Cuban leader born after the 1959 Communist revolution. But analysts question if Diaz-Canel will implement significant changes, including badly needed economic reforms and the lifting of political restrictions.

“We should not expect dramatic policy changes as a result of Diaz-Canel’s succession,” said William LeoGrande, a professor at American University specializing in Cuban politics. “If he was not in substantial agreement with Raul Castro’s policy agenda, he would not be the designated successor.”

Eduardo Gamarra, a professor of Latin American politics at Florida International University in Miami, said Diaz-Canel is neither a progressive nor liberalizing politician. “He has no interest in rushing through any kind of opening that might lead to a more liberal regime,” he said.

Raul is expected to remain head of the Communist Party until 2021. While that means he could hold significant sway over policy, it may also help Diaz-Canel if he decides to pursue economic reforms opposed by entrenched interests in the government and party bureaucracies.

“If Diaz-Canel makes a bold or difficult but good decision, Raul can say, ‘I support him,’ and help smooth the way,” said Jorge Dominguez, a prominent Cuba expert at Harvard University.

Kicking the can down the road: Monetary reform

When Raul came to power in 2008, he implemented a number of economic reforms, but was either unable or unwilling to eliminate a dual-currency system and multiple exchange rates despite his calls to do so. The system has one type of Cuban peso worth 1:24 against the dollar for ordinary Cubans, who receive subsidies, and another, the CUC, that is 1:1 for state-run firms, giving those with access to the CUC significant hard currency advantages.

“Diaz-Canel’s likely policy focus is what should be Cuba’s monetary and exchange-rate policy,” said Dominguez. “For economic management, it is imperative to unify the currencies and the exchange rates.”

Talking about monetary problems but doing nothing about them “would doom the Cuban economy to yet another decade of economic stagnation, one of the least attractive features of Raul’s legacy,” he added.

Reforming the monetary system would be redistributive, creating winners and losers that could unleash political uncertainty.

“Resistance to the reforms comes in part from fear of its political ramifications, as well as the self-interest of bureaucrats,” said LeoGrande.

But both LeoGrande and Dominguez said that the military, which controls everything from state-farms to factories and hotels, supports economic reforms and would likely benefit.

Meanwhile, the urgency of economic reform and attracting investment comes as Venezuela’s dual political and economic crises have hit Cuba hard. As Havana’s main political ally in the Americas, the socialist regime of Venezuela has significantly cut back subsidized oil shipments in a blow to Cuba’s economy.

Relations with outside world

Diaz-Canel will assume power at a time when relations with the United States have plummeted following a historic rapprochement under the Obama administration. The two countries re-established diplomatic relations in 2015, despite a continued decades-long US trade embargo that can only be lifted by Congress. The US-Cuba opening helped contribute to a more than doubling of tourist numbers and an increase in remittances.

The Trump administration, however, seems intent on rolling back those policies. It has already reinstated some travel and commercial restrictions, in part due to what the White House says are concerns over human rights, political prisoners and the absence of free and fair elections.

Adding to tensions, a series of mysterious “sonic attacks” in 2016 and 2017 sickened at least 20 US diplomats in Havana. The alleged attacks, the origin of which still remains uncertain, prompted the US to remove most of its diplomatic staff from its embassy and expel 15 Cuban diplomats from its embassy in Washington.

Trump’s approach is backed by Republican hardliners, especially Cuban-American politicians such as Senator Marco Rubio in the key swing state of Florida, where much of the anti-Castro Cuban diaspora lives. As a result, Trump’s policy is also aimed at serving his voter base in Florida and paying back political debts.

“Diaz-Canel is not going to be very welcoming to any initiatives coming from hardline Cuban Americans” on issues such as civil society and democracy, said Gamarra. “The hardliners in the US will make it easier for him to take that position.”

He added that Cuba has become closer economically and politically to Russia and China, countries that don’t tie investment to questions of human rights and democracy.

However, Dominguez pointed out that while Cuba is not Trump’s top priority, relations look worse than they really are.

“The US and Cuban government retain close cooperation on law enforcement, the Coast Guards, migration, the Guantanamo base borders, hurricane tracking, oceanographic research cooperation, civil aviation and hundreds of thousands of people are still traveling from the United States to Cuba,” he said. “All of that is under the cover of gruff, grumpy, harsh rhetoric. That’s the political bargain Trump has struck: let the good practical policy legacy of Obama continue, but change the rhetoric.”