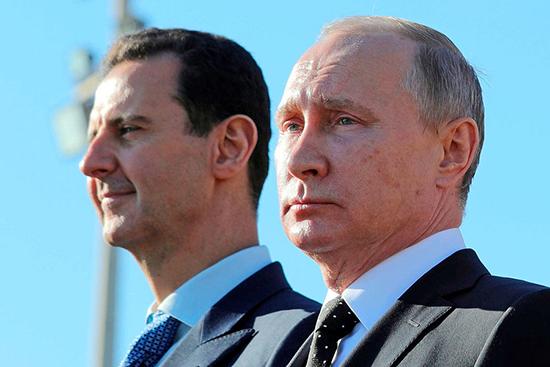 Russian and US-allied forces avoided conflict during Friday’s airstrikes on alleged Syrian chemical weapon sites. But Moscow sees the US’s ongoing involvement in Syria as nothing more than spoiler. Still, analysts say, Russia needs the US to help diplomatically.

APRIL 17, 2018  MOSCOW—Whatever the message the US hoped to send Russia with its carefully orchestrated missile barrage Friday on alleged chemical warfare sites in Syria, it doesn’t seem to have changed any minds in the Kremlin.

Moscow remains convinced that the US has no coherent endgame for Syria, and its continued occupation of about a third of Syrian territory, together with its allies, has no purpose other than to play the role of spoiler, analysts here say. And in the aftermath of the missile strikes, Moscow will continue to back the increasingly successful military campaign to restore all of Syria to control by Bashar al-Assad’s central government.

But while Russia regard the US as a trespasser in the region militarily, it still needs Washington’s help to end the conflict through diplomacy. The Kremlin continues to pursue a peace process excluding the United States and its allies that they initiated together with Iran and Turkey last year, but experts say it is stumbling. That likely means that a return to the previous Geneva process, which involved the West directly, will be necessary.

“It’s becoming clear that there can be no workable settlement for Syria without direct agreement and cooperation between the US and Russia,” says Vladimir Sotnikov, an independent Middle East expert.

Analysts say that Moscow was serious when it hinted that it would strike back against US warships in the Mediterranean or other launch platforms if any Russian lives were endangered by US missiles. But despite Donald Trump’s tweets – “get ready Russia, because they will be coming” – they say that the exchange of explosive declarations last week turned out to be mostly theater.

Kremlin-connected analysts say that US and Russian military “deconfliction” teams that have been quietly coordinating on the ground in Syria for months worked together to ensure that Russian air defenses would be switched off that night and no cruise missile trajectories came near any Russians.

“Russia’s official reaction is to denounce these strikes as illegal and wrong,” says Pavel Zolotaryev, deputy director of the official Institute of USA-Canada Studies (ISKRAN). “They came just before a team of inspectors from the Organization for the Prohibition of Chemical Weapons [OPCW] was to begin its work at the site of the alleged chemical weapons attack in Douma. The fact that US leaders weren’t ready to wait for inspectors to do their job indicates they wanted to make a military statement, and didn’t want it to be clouded by whatever the inspectors might find.

“Luckily, the Pentagon and Russian Ministry of Defense were in close contact, and made certain there would be no complications. So, the strikes had a mostly political and symbolic character. Yet they have introduced new tensions into the US-Russia relationship, which was already very bad,” he adds.

A top Russian military official is now suggesting that Moscow may equip Syria with its second-to-latest anti-aircraft system, the S-300, to deter future strikes by the US and its allies. “A few years ago, taking into account a pressing request from some of our Western partners, we abandoned the supplies of the S-300 missile systems to Syria. Considering the latest developments, we deem it possible to get back to discussing this issue,” said Lt. Gen. Sergei Rudskoi of the Russian general staff.

This fresh source of tensions comes amid a widening storm of tensions between Russia and the West. The row with Britain over Russia’s alleged involvement in the nerve-agent poisoning of former double agent Sergei Skripal and his daughter continues to boil. Mutual rounds of diplomatic expulsions have slashed the physical infrastructure of relations to the bone, leaving Russia and the US in particular almost incapable of carrying out normal contacts.

And the US, which earlier this month slapped sanctions on a list of Putin-connected “oligarchs,” floated the idea of introducing more, though the White House has taken it off the table for now. The earlier round of sanctions caused the ruble to slide and the Russian stock market to tumble. New measures may hurt even more wealthy Russians active in the West and, ironically, actually help the Kremlin by compelling them to bring their money home to Russia.

The method of squeezing tycoons who are close to Putin in the hope they will force him to change course, seems to ignore the reality that Putin’s main accomplishment after coming to power almost two decades ago was to restore the primacy of the state. It was tried in the first round of anti-Russia sanctions following the annexation of Crimea four years ago and has yet to show any results.

“We’ve gotten used to living with sanctions,” says Mr. Sotnikov. Russia’s economy, which slipped into recession following the first wave of sanctions and plunging oil prices four years ago, racked up 2 percent growth in 2017 and seems on track for at least that much this year. “There are areas of solid business cooperation between the US and Russia, which go on despite all these tensions, and it would be a shame if they were harmed.”

A diplomatic role for Washington

The larger question about Syria is whether Russia and the US can cooperate in the endgame and bring a lasting political settlement to the brutal, seven-year-long civil war. Experts say that the Russian-led “Astana Process,” so named for the Kazakhstan capital where the talks have been held, is not going well.

“The military situation in Syria is far better than it was a year ago. But, despite these meetings with Turkey and Iran, a political settlement looks no closer,” says Fyodor Lukyanov, editor of Russia in Global Affairs, a leading Moscow-based foreign policy journal. “Russia’s relationship with these two partners, Turkey and Iran, is very difficult, as are the relations between them. Putin puts a lot of effort into trying to keep his relations with [Turkish president Recep Tayyip] Erdoğan on track, but it’s clearly very hard to do.”

Turkey issued a statement of support for last weekend’s US missile strikes, while Iran appears disappointed with Russia’s failure to deter them, Mr. Lukyanov says.

That’s partially why the US and other Western nations will need to be brought back in to the process, to balance the demands of all the regional players. But that remains difficult while Russia and the US each continue their military campaigns.

“Things are certainly more complicated in the wake of these strikes. Russia is now worried that they may be repeated at any moment,” says Sotnikov. “But communication is still going on between us and the Americans in Syria – it’s actually quite effective – and so there is hope that this dismal picture can be changed for the better.”