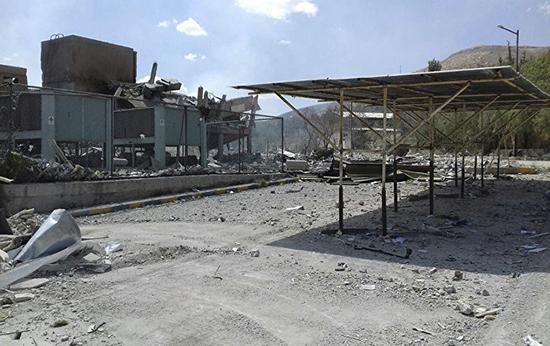 The US, the UK and France launched a strike against Syria on April 14 as retaliation for the alleged chemical attack in Douma. Russia warned the US against delivering a strike, reminding that it has military personnel on the ground and that they will react accordingly.

Wess Mitchell, Assistant Secretary of State has said in a written statement to the House Foreign Affairs Committee that the US doesn’t seek confrontation with Russia in Syria, but warned that it is ready to use force if needed. He also noted that Russian mercenaries have allegedly tried to attack US military positions in Syria.

“We do not seek a confrontation. But our forces will not hesitate to use necessary and proportionate force to defend
themselves as they are in engaged in operations,” Mitchell said.

According to Mitchell, the US has fulfilled its role in preventing the escalation of conflict with Moscow, maintaining contact with it via special channels created to prevent incidents in the very complicated and “overloaded” battle space.

He added that the US and its allies are close to defeating Daesh* in Syria and Iraq.

“In the upcoming days and weeks the US and our allies will weaken and defeat IS[Daesh], support stable Syria and limit malicious influence of Iran,” Mitchell said.

The assistant secretary of state expressed confidence that the Syrian conflict can only be solved via talks in Geneva. He urged Russia to join the talks and also to bring Assad along. According to him, so far Russia has been “a spoiler to Geneva” and added that its “intervention” in Syria and support for Assad has raised the risk of confrontation with Western countries.

Mitchell also claimed that Russia and the US do not share any strategic goals in Syria, claiming that Moscow’s main goals are not the well-being of the Syrian people and stability in the region. According to him, Russia’s goals are establishing its presence to define the fate of the region and creating “demonstrative effect,” to drive a wedge between the US and its allies.

At the same time, Acting Assistant Secretary of State David Satterfield said during his testimony before the House Foreign Affairs Committee on April 18 that the US is actively working with its European partners in order to “fix” the Iran nuclear deal, also known as the Joint Comprehensive Plan of Action (JCPOA).

“It is the intent of the administration at this moment to fix the JCPOA. Those efforts, those diplomatic efforts are underway quite actively with our key European partners. We hope they produce a successful result,” Satterfield said.

What Happened in Syria

The US, the UK and France launched airstrikes against Syria on April 14. They claimed that they were in retaliation for the alleged chemical attack in Douma, which was reported by the infamous White Helmets — a Western-backed NGO, previously caught working with terrorists in Syria.

The strike was conducted despite the fact that the official investigation by the Organization for the Prohibition of Chemical Weapons (OPCW) hasn’t even started. Russia has expressed its concern that the attack might have been performed in order to hinder the OPCW mission long enough for terrorists to conceal all evidence of it being a false-flag attack.

READ MORE: What We Know So Far on Syria Missile Strike Before Probe Into “Chemical Attack”

Damascus denies all accusations, reminding that it destroyed its chemical weapons arsenal years ago under the OPCW convention. Russia has warned the international community multiple times about planned provocations by terrorist groups in Syria, including just hours before the alleged incident.

After the first reports of the alleged attack appeared, Russia sent its chemical corps to investigate the site for traces of a chemical attack, but it failed to find any such traces. Nearby hospitals were also checked for reported victims, but none could be found. Later, the Russian Defense Ministry presented a video interview with two men from the local hospital who witnessed the White Helmets record a staged video of “victims” of the attack. According to the witnesses, several men ran into the building shouting about chemical attacks, spraying water over random patients and filming the whole performance.

Both Moscow and Damascus issued an invitation to the OPCW to visit Douma to determine the truth. The organization’s representatives tried to enter the city on April 18, but their mission was met with gunfire and they were forced to retreat. The head of the mission reported that so far Damascus has done all in its power to aid the OPCW delegation.

An emergency session of the UN Security Council gathered to discuss the incident in Douma. The US presented its resolution, suggesting creating a new commission separate from the OPCW to send to Syria. Russia vetoed the resolution and suggested its own, supporting the idea of sending an official OPCW mission, but it failed to garner enough votes.