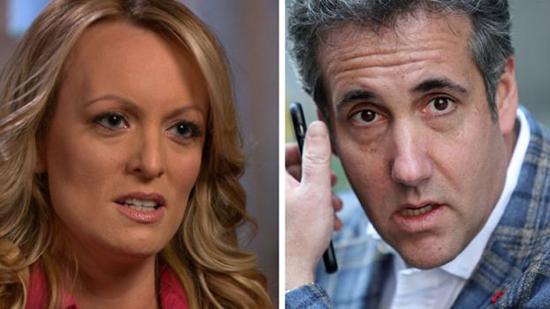 The adult film star who alleges she had an affair with Donald Trump has unveiled a sketch of the man she claims threatened her in a car park in 2011.

Stormy Daniels told ABC’s The View that she was speaking out because she was tired of being bullied and threatened.

However, his lawyer, Michael Cohen, has admitted paying Ms Daniels $130,000 just before the 2016 US presidential election, which she says was a payment intended to keep her quiet.

On Tuesday’s daytime ABC Television show The View, Ms Daniels defended herself against questions about her motives and her “end game”.

The actress, whose real name is Stephanie Clifford, is suing Mr Cohen for defamation and fighting Mr Trump’s lawyers who are seeking at least $20m in damages from her for breaking a 2016 non-disclosure deal.

She has filed a lawsuit to scrap the agreement, which her lawyer believes is invalid because Mr Trump did not sign it.

She repeated her claim that she had sex with Mr Trump just once, in a hotel room during a celebrity golf tournament in Lake Tahoe, California, in July 2006.

She alleges she was on her way to a fitness class with her infant daughter, when a “sort of handsome” man warned her to “forget the story, leave Donald Trump alone”.

When questioned by the TV hosts as to why she did not report the incident, she explained she was afraid to go against the warning and wary of revealing her then-secret alleged affair with Mr Trump to the police.

She also added: “I didn’t tell my husband at the time, I was embarrassed. I didn’t want him to think I was a bad mum or that I put my daughter in danger.”

Ms Daniels and her lawyer Michael Avenatti, who also appeared on the show, revealed a sketch of a lightly bearded man in his 20s or 30s with backswept hair.

Mr Avenatti told the public they would be rewarded for tips leading to the identification of the man.

Ms Daniels’ appearance on mainstream US television comes a day after she attended a federal court hearing where Mr Cohen was seeking to limit the ability of prosecutors to review documents seized in recent raids on his home, office and hotel room.

Mr Trump’s personal lawyer is being investigated for criminal wrongdoing, and Ms Daniels said she wanted to be present for anything that might be relevant to her.

Legal analysts have said that Mr Cohen’s $130,000 payment to Ms Daniels could have violated the rules on financing Mr Trump’s 2016 presidential campaign.