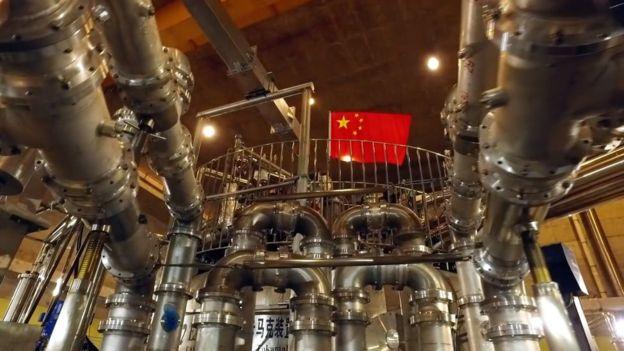 In world with an ever-increasing demand for electricity and a deteriorating environment, Chinese scientists are leading the charge to develop what some see as the holy grail of energy.

The BBC’s Stephen McDonell was given rare access to their facility in Anhui province.

On Science Island in Eastern China’s Anhui Province, there is a large gleaming metal doughnut encased in an enormous shiny, round box about as big as a two-storey apartment. This is the Experimental Advanced Superconducting Tokamak (or EAST).

Inside, hydrogen atoms fuse and become helium which can generate heat at several times the temperature of the sun’s core.

Powerful batteries then control the reaction, which could one day produce vast amounts of electricity if maintained.

Around the globe, they are trying to master nuclear fusion – in the United States, Japan, Korea, Brazil and European Union – but none can hold it steady for as long as the team in Anhui.

Right now that’s 100 seconds and it gets longer every year. Here they’re already talking about goals which are 10 times as long, at temperatures of 100 million degrees Celsius.

But there’s a reason why fusion has eluded scientists and engineers since the early advances in the Soviet Union in the 1950s.

It is really difficult.

Maintaining a limited fusion reaction in a controlled environment has been possible for more than 50 years and yet the duration is still a long way short of what would be needed to capture this vast heat and convert it to electricity.

The EAST system is a souped-up version of the original Russian design.

On the day we visit we watch a lively debate unfold in the control room. There are leakage problems – not material getting out but air being sucked into the vacuum within – and they need to find a solution.

A separate group is in walkie-talkie contact with the control room. They move around the configuration of pipes, electricity housing and stepladders surrounding the Tokamak, looking to patch the leak.

When Xi Jinping visited here he wanted to know about the dangers of this technology, so we asked what they told China’s president.

“Magnetic confinement is controllable fusion. I can shut down the power supply and it’s perfectly safe. There won’t be any nuclear disaster.”

Current nuclear reactors rely on fission and the splitting of an atom which leaves toxic waste that must be safely stored for potentially tens of thousands of years.

A nuclear fusion power plant would instead stem from the joining of two nuclei to make a single nucleus and then magnets inside the internal wall of the doughnut contain the reaction (called the plasma) inside the huge tube.

However the technology is not cheap.

It costs $15,000 a day just to turn on the machine and that’s without the wages of hundreds of specialists, the construction of buildings and the like.

And yet the Chinese government is digging into its deep pockets to fund the project in the full knowledge that it could be decades before fusion is lighting up major cities.

“Fusion is going to require huge breakthroughs from scientists and engineers as well as a lot of financial backing from the government,” Mr Song says.

“It’s a project which costs so much but personally I think it’s going to be great for the sustainable development of mankind.”

Because it carries such a hefty price tag and because it is so hard, the pursuit of fusion is seeing a fair amount of international collaboration.

For example, China is one of the countries contributing to the ambitious International Thermonuclear Experimental Reactor (ITER) project in southern France which – apart from European nations – draws in India, Japan, Russia, South Korean and the United States. It is expected to start testing in 2025.

In the meantime China is also making leaps and bounds on its own.

The proposed next step for this team is to design a fully-fledged nuclear fusion test reactor capable of generating electricity. To eventually work properly it would have to be much bigger than what we’ve seen and able to contain a plasma reaction indefinitely rather than for a minute-and-a-half.

“The demand for energy is huge in every country and China has a roadmap for fusion-generated power,” says Mr Song. “We want to complete the design for a test fusion reactor within five years. If we succeed it will be the world’s first fusion reactor.”

The eventual hope is that fusion might produce electricity in volumes beyond mankind’s wildest dreams.

It may be some way off but Beijing is taking the challenge very seriously meaning that, if it can get it to work, China could end up having the edge over all others when it comes to the power generation of the future.