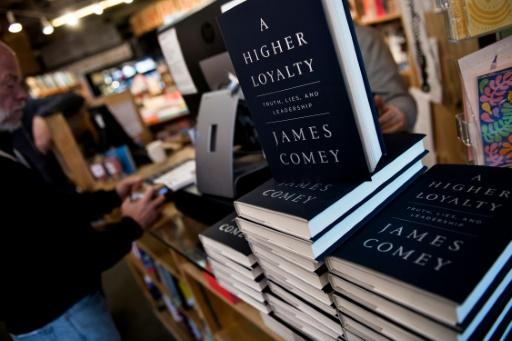 Former FBI director James Comey fended off attacks Tuesday over his blistering criticism of President Donald Trump as his new book hit the stores and held the top slot on Amazon’s bestseller list.

Comey, who was fired by the US leader in May 2017, describes Trump in the book as “morally unfit” for office, as a compulsive liar who threatens fundamental American values.

But critics say the veteran prosecutor has simply sought to even his score with the president through petty criticisms in the pointedly titled “A Higher Loyalty: Truth, Lies and Leadership.”

In an interview with National Public Radio to kick off the release Tuesday, Comey retorted that his descriptions of Trump’s over-long neckties, his tangerine hair and skin, and the size of his hands were simply an attempt to engage the reader through vivid storytelling.

“I’m not making fun of the president. I’m trying to be an author, which I’ve never been before in my life,” Comey said.

“But while I’m typing, I can hear my editor’s voice ringing in my head, ‘Bring the reader with you. Show them inside your head. Bring them with you.'”

Comey’s memoir alternates between philosophical musings and advice on the issue of leadership — insisting on the need for honesty and transparency in public life.

The former FBI chief condemns Trump as having brought to the U.S. capital never-before seen values and ways in a U.S. president, running the White House like a Mafia don.

“This president is unethical, and untethered to truth and institutional values,” he writes. “What is happening now is not normal.”

But the book has also unleashed a torrent of attacks against Comey — accused by his critics of self-satisfied moralizing.

Former Republican presidential candidate Mike Huckabee labelled him “sanctimonious” and a self-promoter with an “enormous ego.” Trump branded him an “untruthful slime ball” and called for his prosecution.

Comey has strongly defended his book, and denied suggestions he wanted to capitalize on his notoriety to enter politics.

“I’m very worried,” he said, explaining his criticism of Trump. “This is not some tin pot dictatorship where the leader of the country gets to say ‘the people I don’t like go to jail.'”

“This is not normal. This is not OK. There’s a danger that we will become numb to it, and we will stop noticing the threats to our norms.”

“A Higher Loyalty” has enjoyed strong pre-orders, and held onto its spot Tuesday as the top selling book on Amazon, including both fiction and non-fiction.

According to CNN, Flatiron Books, an imprint of publishing giant Macmillan, has printed an initial 850,000 copies, and expects to print more.

Comey is doing a number of media interviews and plans appearances in about a dozen cities, where the public has snapped up tickets, at $25-35 each, to hear him talk.