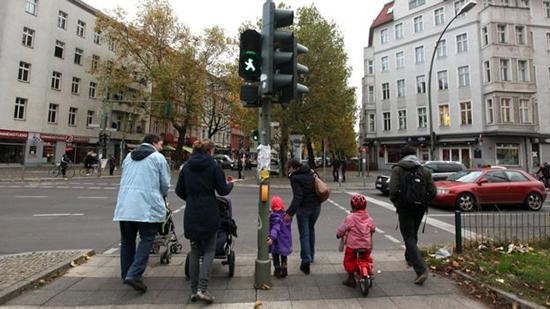 German police are investigating an assault on two young men in Berlin, in which the attacker was filmed shouting anti-Semitic abuse.

The men say they were harassed in the Prenzlauer Berg area on Monday while wearing Jewish skullcaps (kippahs).

A video of the incident, which was later shared on Facebook, shows the attacker hitting the men with his belt.

He is heard shouting “Yahudi”, an Arabic word for Jew, before being dragged away by another man.

One of the victims, a 21-year-old Israeli called Adam, then reportedly followed the attacker but gave up after a glass bottle was thrown at him.

“I’m surprised something like this happened to me. I’m still in shock,” he told Israel’s Kan television channel.

“It happened right here, next to my home, when I was on my way to the train station with my friend.”

He said a group of three men started insulting them and became angry when they were asked to stop.

“One of them ran at me,” he said. “I immediately felt it was important to film because I didn’t think we could catch him before police arrived.”

The video of the attack was shared on Facebook by the Jewish Forum for Democracy and against Anti-Semitism (JFDA), which said the attack was unbearable to see.

“I used to always advise my Jewish friends and acquaintances not to wear a kippah so as not to show their Jewish identity. I changed my opinion,” a spokesman said.

“We must take up this fight and be visible again in public.”

In a twist to the story, the Israeli victim later told Deutsche Welle TV that he had grown up in an Arab family in Israel and was not himself Jewish.

Germany’s Jewish population has grown rapidly since the fall of the Berlin Wall.