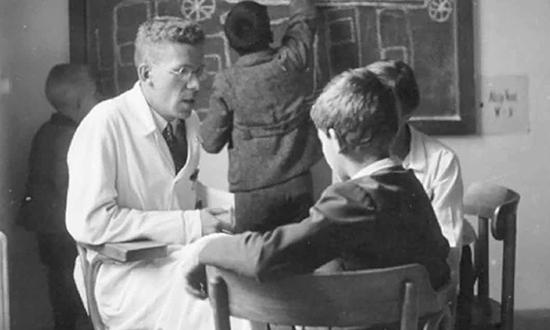 The Austrian doctor after whom Asperger syndrome is named was an active participant in the Nazi regime, assisting in the Third Reich’s euthanasia programme and supporting the concept of racial hygiene by deeming certain children unworthy to live, according to a study by a medical historian.

Herwig Czech, from Vienna’s Medical University, has made the claim in an academic paper published in the open access journal Molecular Autism, following eight years of research into the paediatrician Hans Asperger.

Asperger is hailed as a pioneer in the field of child psychiatry and paediatrics, particularly for his groundbreaking contribution to the understanding of Asperger’s syndrome and the autism spectrum.

But by unearthing previously untouched documents from state archives, including Asperger’s personnel files and patient case records, Czech has revealed a scientist who allied himself so closely with the Nazi ideology that he frequently referred children to the Am Spiegelgrund clinic, which was set up as a collecting point for children who failed to conform to the regime’s criteria of “worthy to live”.

Nearly 800 children died at the clinic between 1940 and 1945, many of whom were murdered under the notorious T4 euthanasia scheme.

In a joint statement, the editors of Molecular Autism – Simon Baron-Cohen, Ami Klin, Steve Silberman and Joseph Buxbaum – said they welcomed the fact that Czech’s “meticulous research” had finally thrown light on decades of scepticism about Asperger’s claims that he had taken a caring approach to his patients.

“The degree of Asperger’s involvement in the targeting of Vienna’s most vulnerable children has remained an open and vexing question in autism research for a long time,” they wrote in a joint statement.

At the time the term Asperger syndrome was first coined in London in 1981, by Dr Lorna Wing, they added, “She and we as scientists and clinicians, as well as the broader autism community, were unaware of Hans Asperger’s close alliance with, and support of, the Nazi programme of compulsory sterilisation and euthanasia.”

Among Czech’s findings is a photo of the distraught face of Herta Schreiber, who suffered from encephalitis and died of pneumonia three months after her admittance to Spiegelgrund, on Asperger’s orders, a day after her third birthday.

Asperger ordered her transfer because “she must be an unbearable burden to her mother” and she was deemed incurable. A specimen of Herta’s brain, found in a preparation jar in the basement of the clinic in the late 1990s, was buried in 2002, Czech said.

There was no evidence that Asperger deliberately targeted for euthanasia the patients with distinct psychological characteristics he had called “autistic psychopaths”, under the diagnosis for which he became famous, said Czech. But his diagnoses proved burdensome for many of his patients, even years after the collapse of the Nazi regime. Asperger continued working as a doctor for more than three decades.

Neither, said Czech, was there evidence of the benevolent attitude towards his patients that Asperger and others later boasted of. Czech also found a distinct lack of evidence of Asperger’s self-coined “pedagogic optimism”, according to which some could be treated or cured.

Asperger did take considerable pride in his “Heilpädagogik” – therapeutic pedagogy – which promoted the popular idea among his colleagues and Nazi leaders at a time of labour shortages that in certain cases people with autism made excellent soldiers and reliable workers. But Asperger also wrote about the need to “carry out restrictive measures” against patients deemed to be incurable and with hereditary conditions “out of a sense of great responsibility” towards the German race.

“In short, he was responsible for depriving of their liberty many children whom he deemed incapable of existing outside institutions,” Czech said.

Asperger rose to the highest position in the expanding field of therapeutic pedagogy, adapting it to suit Nazi ideology, and was promoted over the heads of Jewish colleagues who were forced out of the profession.

In his 43-page paper, Czech is deeply critical of authors in the English-speaking world, who he accused, over decades, of perpetuating a “predominantly apologetic narrative” of Asperger, “based on the limited range of sources available to them”. He also criticised Uta Frith, considered one of the UK’s leading autism experts, saying she had barely mentioned Nazism in her 1991 book Asperger and His Syndrome, which he believed had been instrumental in establishing the common view that Asperger had “defended his patients against the Nazi regime at great personal risk”, when the opposite had been the case, Czech said. Frith declined to comment for this article.

Czech also lists examples of how Asperger often deemed sexually abused children to be responsible for the abuse and cites how antisemitic stereotypes crept into Asperger’s diagnostic reports.

“Asperger refused to acknowledge the reality of anti-Jewish persecution by the Nazi regime; this indifference is visible both during and after the war,” said Czech.

The historian admitted that his findings might well be painful for autistic people and their families to digest, but said he was obliged to reveal them.

“It would have been wrong for me to have withheld this information, however difficult it might be to hear,” he said. “At the same time, there is no evidence to show his contributions to autism research were tainted by his problematic role during National Socialism. So purging the term Asperger from the medical lexicon would not be helpful. Rather, this should be an opportunity to look at the past and learn lessons from it.”

Carol Povey, director at the National Autistic Society in the UK’s Centre for Autism, said: “We expect these findings to spark a big conversation among autistic people and their family members, particularly those who identify with the term ‘Asperger’. Obviously no one with a diagnosis of Asperger syndrome should feel in any way tainted by this very troubling history.”