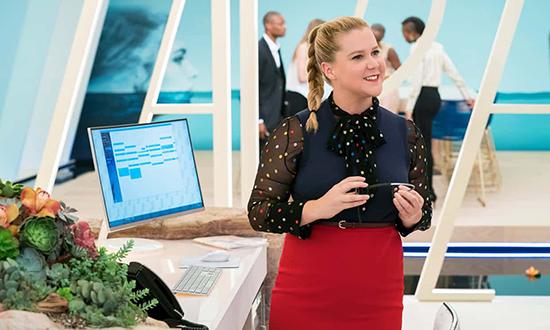 As an insecure woman finding her place in a superficial world, the comedian’s considerable talents can’t save a subpar script

Amy Schumer’s sharp, occasionally hilarious, brand of comedy is reliant on a number of constants, one of the most defining of which is a frank, often brutal discussion of how she’s physically compared with other women. In her standup, she frequently mocks the vapidity of an industry that deems her abnormal while remaining confident and, despite some self-deprecation, secure about her appearance.

The plot of her latest star vehicle I Feel Pretty feels like comfortable territory then, focusing on the issue of self-image in a society ruled by superficiality. As was often the formula in her once rather brilliant sketch show Inside Amy Schumer, a relatable topic is used as the jumping-off point for a fantastical conceit. In the film, she plays Renee, a woman stuck in an unglamorous job, forever being made to feel lesser by bar staff, shop workers and men who reject her online. After being inspired by the movie Big, she makes a wish to be beautiful and the following day, after an accident in a cycling class, she wakes up to a different reflection.

But while Renee might see an altered face and body in the mirror, those around her still see the same person yet with an increased sense of confidence and her new self is suddenly thrown into a world of opportunity, romance and discovery.

Written and directed by Abby Kohn and Marc Silverstein, a pairing who also scripted 2016’s smart, fresh and quietly progressive comedy How to Be Single, the film offers the potential for a similar balance of humor and life lessons. But while their previous attempt managed this with ease and a light touch, there’s a frustrating absence of both here, the end result feeling more like an awkwardly assembled attempt to recall high-concept hits from the 80s. There’s a bit of Working Girl as Renee tries to climb the corporate ladder of a cosmetics company using her experience outside of the beautiful bubble. There are elements of body swap farces like Vice Versa and Like Father Like Son as she gets used to her new look. And, as the film references, there’s a heavy debt owed to Big. Yet Kohn and Silverstein can’t quite figure out if it’s a parody of such fare or an earnest examination of the shallow nature of society.

One of the bigger problems with I Feel Pretty is the vagueness of the magical element of the plot. Since the film errs toward the latter of the two aforementioned definitions (a scene of Renee throwing a quarter in a fountain, wishing to be beautiful, is played completely straight), it’s aggravating that the rules seem so undefined. In a recent interview with Vulture, Schumer claimed that Renee is seeing the same person just with a new appreciation but then why does she have to re-introduce herself to friends with the assumption that they won’t recognize her? Given this, why does no one tell her she looks exactly the same as before? Is she unable to discern between pictures of herself from before and taken now? These questions niggle throughout.

While there’s clear comic potential in the setup, especially with Schumer’s bravado and willingness to indulge in physical comedy, the film never quite mines the laughter that it should. There’s a spikiness absent from the script, a stultifying lack of killer one-liners, and what makes this even more wasteful is that one knows from watching Schumer’s show that she could have written something far more effective herself. It has the feel of a rough draft, as if it’s waiting for a script doctor to add in the funny bits. It’s also a shame to see Schumer hemmed in by the family-friendly PG-13 rating, rather like watching Melissa McCarthy unable to riff quite so rudely in Ghostbusters.

Even though the script might let her down, Schumer does still manage to sell a smattering of the comic moments (the opening scene has a promising knockabout tone), but when she reaches the more dramatic elements, she struggles to convince. There’s also a rare light turn from Michelle Williams as the head of a cosmetics company, which is at best strangely fascinating and at worst boringly one-note (she has a funny voice and that’s it).

As the film edges closer to the feelgood finale, tears are shed, fridge magnet wisdom is delivered and broad realizations are made, but despite best intentions, it all feels slightly empty. While in How to Be Single, the final act vibrantly celebrated the importance of female friendship and the value of not measuring self-worth via one’s relationship status, it feels clumsier and less concise this time around, the final speech sounding like an internal Powerpoint presentation for a new Dove campaign (it’s also unveiled at a launch event for a new line of makeup – inspiring!). Despite how easily relatable Renee’s initial insecurity might be, we’re taken so deep into Hollywood formula by the end, without even a self-aware wink to ground it, that a smooth, corporate blandness washes over the film (and it’s not helped by the embarrassingly blatant promotion of SoulCycle who is, yep, putting on a range of themed I Feel Pretty rides this month).

The lessons at the end are as superficial as the culture the film was originally trying to critique. In one scene, Renee finds out that her attractive new friend, played by Emily Ratajkowski, is going through relationship issues and soon after, also finds out that her glamorous boss suffers from workplace nerves – the earth-shaking discovery that, wow, hot people have problems too!

Schumer showed genuine star presence in the self-scripted Trainwreck (before Judd Apatow’s conservatism derailed it), but after Snatched underwhelmed, I Feel Pretty fails to put her Hollywood career back on track. Her recent standup special is proof that her distinctive voice remains unfettered but on the big screen, it’s sadly being silenced.