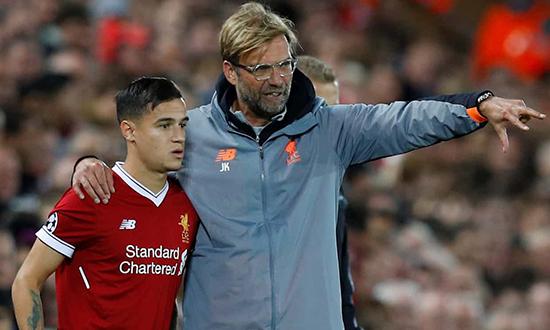 Jürgen Klopp has shown that you can improve a side while selling your best player – it is a victory for team functionality, philosophy and identity

I have heard Jürgen Klopp cite inspirations as varied as heavy metal music and Rocky Balboa so I wouldn’t be surprised if the Liverpool manager was also familiar with Aristotle. After all, Klopp showed in January that his football philosophy is very much in line with the great Greek thinker who believed that “the whole is greater than the sum of its parts”.

Klopp shocked many in the football world when almost four months ago he sanctioned the sale of his most technically gifted player, Philippe Coutinho, who had been outstanding in the first half of the season and did not replace him like for like, causing supporters and pundits to question everything from his judgment to his sanity. Instead he recruited a centre-back in Virgil van Dijk and trusted his instinct that the team would improve as a consequence.

If you reflect on some of the commentary and analysis of Liverpool at the end of the January transfer window you would assume that their performances would tail off without the genius and creativity of Coutinho and that they could not possibly withstand the loss of a world-class player.

Instead fast forward to mid‑April and I cannot remember a time when Liverpool have been in such a strong position and fans so hopeful in the short and long term to fight for the top trophies at home and in Europe.

The narrative which Klopp has superbly orchestrated is a story about the victory of team functionality, philosophy and identity where the importance of team chemistry, understanding of individual roles within a system and collectivism is evident. This is vital in a sport where increasingly more importance is placed on the individual superstar and the size of transfer fees and wages that come with that kind of player.

What Liverpool have achieved this season, especially since Coutinho moved to Barcelona and they acquired Van Dijk, should be lauded and studied by fans, pundits and aspiring coaches such as me in understanding that success can be built even while losing top individual attacking players if you have a fundamental style of play that enables a team to outweigh the sum of its parts and produce not just winning football but get supporters of all allegiances off their seats every time they play.

What Liverpool have achieved this season should be lauded and studied by fans, pundits and aspiring coaches

Klopp has shown that you can improve a side while selling your best player if you cater to the needs of your most productive players in the way that you play and it is no coincidence that the signing of Alex Oxlade‑Chamberlain has tactically enabled the likes of Sadio Mané, Roberto Firmino and the outstanding Mo Salah to be even more of a threat.

Oxlade-Chamberlain, while a gifted footballer, does not have the technical ability of Coutinho but what he does bring is an athletic dynamism and power that Coutinho doesn’t possess and an extreme intensity which creates a platform for Liverpool’s lightning transitions where the likes of Mané and Salah cause havoc. It was evident in the first leg of the Champions League quarter-final against Manchester City where in that first half their pressing, counterpressing and attacking transitions were incredible and I question whether, if Coutinho had been playing instead of Oxlade-Chamberlain, Liverpool would have been quite as dynamic, intense and productive.

Also, in addressing their need for a top centre-half Liverpool now possess an added defensive steel, giving their outstanding front three the opportunity and foundation to score and create goals. I also look at the fundamental way Klopp sets out his teams and the way that individuals within his system have improved because they know what is expected of them.

Andrew Robertson, Trent Alexander-Arnold, Mané, Salah, Firmino and even a veteran in James Milner are raising their game week after week and have played an integral part in implementing the principles of Klopp’s coaching while justifying the faith he places not on reputation or transfer fee but the performances of those he trusts.

It all comes down to team functionality and forward planning, and this can be achieved only with a top manager who understands and is faithful to his style of play regardless of the inevitable criticism he faces when times get tough. Pep Guardiola and Klopp have been criticised in this country for sticking to their football principles when results have not been up to scratch but this comes with the territory and is understandable, while the bigger picture shows that recruitment and improving the players on an individual level increases their monetary value and gives the football club a vision and plan for the longer term.

Selling Coutinho for almost £150m is a great example of this. He has been replaced in the team by a relatively young player in Oxlade-Chamberlain, who possesses a completely different football profile but fits perfectly into the team’s philosophy at a fraction of the price and has improved the team’s functionality and chemistry overall.

This is managerial genius and it not only keeps the fans happy but also the directors and shareholders who are always checking the club spreadsheets!

This Liverpool journey has only just begun and I am excited to see where it ends both this season and in years to come – but it is also a story of how we need to see the whole picture, as fans, coaches and in the media, that matches are rarely won by one superstar but by the collaboration and collectivism of 11 players committed to the functionality of the team.