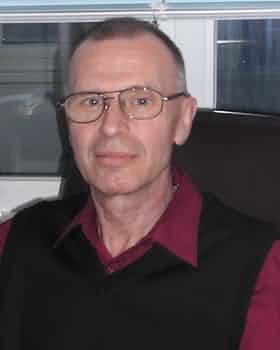 Moscow continues to deny the existence of a chemical weapons programme called Novichok.

But this is a question of semantics.

On Russia’s Black Sea coast I meet Vladimir Uglev, a scientist who helped develop nerve agents for the Soviet Union.

“The aim of the programme was to produce a substance far more powerful than the nerve agent VX – 10 times more powerful,” he tells me. “And that’s what we got.”

Mr Uglev, 71, claims he created the poison that was used in the attack on Sergei and Yulia Skripal in Salisbury on 4 March. It has been identified in Russia by the code A-234.

“I can tell by the mass spectrometry readings, the presence of fluorine, by its molecular weight, and from all the spectrum data I was sent recently.”

But if the nerve agent was so powerful, how did the Skripals survive? Vladimir believes they received a “small dose… close to the threshold level.”

Earlier this week the UK revealed the poison was delivered “in liquid form”.

I ask Vladimir: if the nerve agent used in Salisbury was the one he synthesised, does the poisoning prey on his conscience?

“These are not the first victims on my conscience,” he tells me. “If I thought about it, I could probably count a dozen people who’ve been poisoned by our substances, in different circumstances, for example, at the military training ground. Then there was the case of scientist Andrei Zheleznyakov who got infected in the laboratory.”

Vladimir Uglev worked at a state laboratory in Shikhany, in Russia’s Saratov region. One day he himself was involved in an accident with a novichok.

“It was with ‘novichok’ A-240. The solvent boiled over and splashed on to my right hand. I put my hand into hydrochloric acid, then washed it with an alkaline peroxide solution and put it under the tap.”

“You could say the Skripals and I are baptised by the same novichok, except that in my case it was A-240, not A-234. But it was my substance. And judging by how pure their test sample proved to be, this may well have been from a batch made by my own hands. It has a long shelf life, and virtually no expiry date.”

The Russian state continues to insist it is innocent; that accusations against it over the Salisbury poisoning are part of a “Russophobic” plot and a “provocation” by Britain and America.

Yulia Skripal, 33, was discharged from hospital in Salisbury earlier this month and her 66-year-old father is no longer in a critical condition. Officials say the highest concentration of the Novichok agent was found at their house.

Media captionMoscow’s UN ambassador Vasily Nebenzia: “You are playing with fire and you will be sorry”

Moscow maintains there is no evidence that it targeted the Skripals.

“It’s absolutely right,” Vladimir Uglev tells me. “You will never prove Russia’s guilt. Unless you can find the actual test tube that contained the actual poison.”

“But the logic of events suggests it was Russia, as does the way our leaders reacted. They were so quick to say ‘It wasn’t us!’ It’s like when a thief steals something at the market: he’s the first to shout ‘The thief’s not here, he’s over there! Catch him!'”

Is Vladimir Uglev surprised that his country stands accused of carrying out a chemical attack in the UK?

“Not really,” he tells me. “And it’s not Putin who is to blame. All of us in Russia are at fault. If this is what our country is like, what has Putin got to do with it? Replace Putin with Margaret Thatcher, and do you think anything would change? It wouldn’t. The problem is that our society doesn’t want to change.”