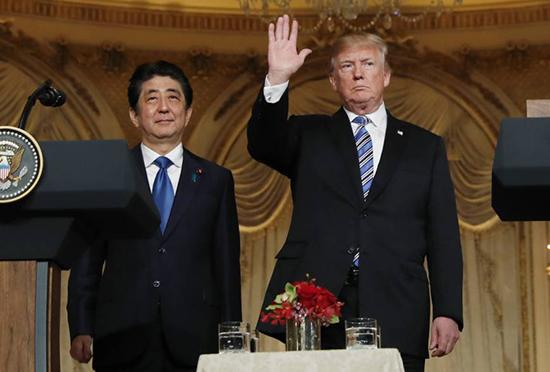 By Brian Bennett and W.J. Hennigan

As the Trump Administration moves closer to talks with North Korean dictator Kim Jong Un, fears are mounting from allies and U.S. national security officials on whether President Donald Trump can secure a landmark nuclear deal without giving away too much.

In between meetings with Japan’s Prime Minister Shinzo Abe in the ornate halls of Mar-a-Lago on Tuesday, Trump revealed that the U.S. is in direct talks at “extremely high levels” with North Korean officials. The Washington Post reported that Trump’s nominee for Secretary of State, outgoing CIA Director Mike Pompeo, met with Kim in North Korea over Easter Weekend.

The stakes are incredibly high. Kim and his predecessors have long wanted formal recognition as a nuclear power and for the 28,000 U.S. troops stationed in South Korea to leave the Korean peninsula. He has relayed to the Trump Administration that he is willing to discuss denuclearization, but senior U.S. national security officials are wary of entering a protracted negotiation process that might buy Pyongyang time to complete its development of a nuclear-tipped intercontinental ballistic missile that can reach American shores.

Analysts believe Kim’s nuclear weapons program is continuing to advance rapidly and could be within a year of a fully capable nuclear-tipped ballistic missile that can reach the U.S. mainland.

“The big fear is Donald Trump gets in a room with Kim Jong Un and offers to pull all troops from the region in order to get Pyongyang to give up their nukes,” said Joel Wit, a founder of the 38north.org website on North Korea that’s affiliated with Johns Hopkins University.

In particular, Abe has concerns that a possible deal between the U.S. and North Korea could leave Japan vulnerable to attack, Wit said. “But at the end of the day, Trump is going to do what he wants to do.”

Trump said he would like to meet with Kim by “early June” and added that five different potential locations are under consideration. In the meantime, a similar meeting between Kim and South Korean President Moon Jae-in is scheduled to take place on April 27 at the demilitarized zone between North and South.

Trump remarkably gave his “blessing” to the South Korea and North Korea leaders discussing a formal end to the Korean War, which has continued despite an end to battlefield fighting after the signing of an armistice in 1953, a step that American presidents have long insisted come only after Pyongyang agree to give up its nuclear weapons program.

Trump’s unexpected announcements with Abe sitting next to him in a matching blue and white striped tie, only set in relief how sidelined Japan has been far in the negotiations over Korea, which have mostly been handled out of Seoul and Washington.

North Korea’s string of 23 missile launches last year posed serious national security concerns for Abe. Several of the tested missiles fell in the sea just a couple hundred miles off the coast of Japan, and several of them completely flew over the northern part of the country. Narushige Michishita, a former Japanese Defense Ministry official who teaches at the National Graduate Institute for Policy Studies in Tokyo, said Abe is aware that dialogue with North Korea is important, but it must be backed by pressure.

“North Korea has used the same combined tactics of brinkmanship and peace overture in the past,” Michishita said. “Abe knows it very well, and he will share his experience with Trump.”

Abe pressed Trump during their private meeting to tell reporters the U.S. would bring up the fate of dozens of Japanese citizens abducted by North Korea in the 1970s and 1980s when Trump meets with Kim. Abe is under tremendous political pressure at home as his ratings tumble in the wake of a widening scandal over the sale of state-owned land and allegations Abe’s administration took steps to over it up. Demanding North Korea come clean over the kidnapping of Japanese citizens has been a central issue in Abe’s political career.

Later, speaking to reporters, Trump obliged Abe and agreed to bring up Japanese abductees with Kim.

For his part, Abe gave Trump credit for a “major change in terms of North Korea’s behavior” since Kim sent a delegation to the Winter Olympic Games in Pyeongchang.

The world breathed a collective sigh of relief after the games came and went this year without incident. There’s no denying that Trump – by first insulting and then agreeing to meet with Kim — is trying a new approach in a field where traditional ways of approaching diplomacy have failed.

The United Nations Security Council has repeatedly slapped crippling sanctions on Pyongyang since 2006 when the nation carried out its first nuclear test. The measures cut North Korea from much of the world’s economy, but hasn’t stop the steady advances in military technology.

North Korea does appear to have slowed down its overt testing efforts, which may be a result of Trump’s “maximum pressure” campaign, or, a reflection that Pyeongyang has learned what it needed to learn from its missile tests last year and is secretly working on another aspect of the program.

After decades of defying international pressure to hold off on additional weapons development, North Korea has yet to test-launch a missile in 2018. By this time last year, North Korea had carried out five tests of eight missiles.

But the question is can it hold? Can the Trump Administration diplomatically engage the world’s most isolated and despotic regimes from staying nuclear?

I told Rex Tillerson, our wonderful Secretary of State, that he is wasting his time trying to negotiate with Little Rocket Man…

In a sharp contrast to calling Kim “little Rocket Man” on Twitter last fall, Trump seemed to go out of his way to show respect for Kim on Tuesday, saying he is looking forward to meeting with Kim and hopes it will be a success. “I can say this: They do respect us. We are respectful of them. And we’re going to see what happens.”