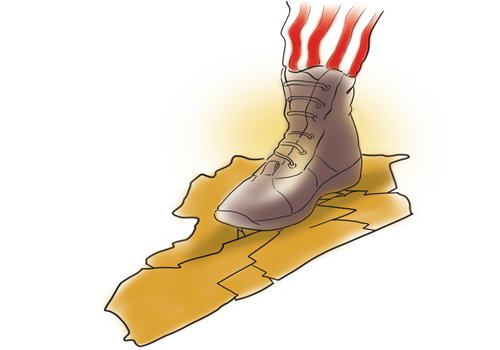 It would be too far-fetched to compare the recent US-Russian standoff in Syria with the 1962 US-Soviet Cuban missile crisis. Then, a nuclear war between the two was highly probable, and the existence of humanity was in question. This time, there was a moderate possibility of a local clash between the American and Russian forces in the area, which might have escalated to a higher level, only then putting global security in danger. But whereas the dramatic confrontation of more than half a century ago stimulated strategic de-escalation between the two superpowers of the day, this month’s US missile attacks against Russia’s ally Syria are another step in ratcheting up tensions between Washington and Moscow. There is more to come. The new hybrid war is different from the Cold War.

An analysis of the most recent spike in tensions leads to the following conclusions: US President Donald Trump’s administration is fully determined to use military force to discipline challengers and reassert US global primacy. Syria, which was first hit by the Trump government exactly a year ago, in many ways is an easy target. Other countries should pay attention, primarily Iran and North Korea. The looming refusal by the White House to certify Tehran’s compliance with the Joint Comprehensive Plan of Action agreement concluded in 2015 could lead to US strikes against Iranian targets, from nuclear facilities and missile bases within Iran to Iranian assets in Syria to pro-Iranian groups across the Middle East. The Iranians are clearly seeing that danger and are bracing for a possible US attack.

In North Korea, for now, Trump has decided to play the peace card. He must hope that Kim Jong-un, whom he is due to meet within six weeks or so, will give up North Korea’s nuclear and missile programs, and agree to “denuclearize.” Pyongyang’s concept of denuclearization, however, is very different from Washington’s. It is anything but surrendering the country’s crude deterrence capability, its only guarantee of survival, for US verbal promises, which can be withdrawn at will. Kim certainly does not want to share the fate of Muammar Gaddafi. When Trump realizes that, he might well shift gears, and a peace overture could lead to a war.

Another takeaway from Syria, but also from the Skripal poisoning case in Salisbury, is that the Trump administration has rediscovered the political value of US allies. Having nearly dismissed allies in its America First approach, the White House is now busy consolidating political and military coalitions of Western countries against those whom it has designated as its rivals and adversaries: Russia and China.

For now, most pressure is applied to Russia as the apparently weaker foe, but China is clearly viewed as the principal challenger to the US-led order. What happens over North Korea, but also the South China Sea and possibly Taiwan will determine not only the parameters of the Sino-US strategic relationship, but also the future of the global order. Russia’s relations with its European neighbors are different from China’s with the rest of Asia, but in both cases the US will seek to isolate their rivals in their own neighborhoods.

Both the Skripal poisoning and the alleged chemical weapons attack in Douma have led to immediate US-led action, even before investigations were carried out and conclusions reached. In the current psychological environment, public accusations by the US and its allies serve as a verdict. Evidence, or lack thereof, is no longer an issue: Trust in the US and its allies is.

This has important implications for international organizations, from the Organization for the Prohibition of Chemical Weapons to the United Nations. The US is mobilizing coalitions of its allies and partners which are expected to follow the leader. Questioning the wisdom of Washington’s policy on key geopolitical and strategic issues is regarded as apostasy. During the Cold War, the US protected its allies from domestic and external threats. In the hybrid war, the time has come for those who were then protected, to pay back.

Yet, some of the key lessons of the Cold War are not being totally discarded. The US military in Syria took utmost care not to hit Russian targets. The warning of retaliation against the US in case Russian citizens were hurt issued well before the Syria attack by General Valery Gerasimov, chief of the Russian General Staff, was well heeded. Neither the Pentagon nor the White House intends to provoke a nuclear exchange with US strategic rivals. Given the US’ unique military superiority over other great powers, the hybrid war foresees military action, but escalation to really dangerous levels should be avoided. The idea is to break the will of rival leaderships or, failing that, put the cost of their policies so high as to precipitate domestic dissent and lead to a policy correction under new leadership more willing to accept the rules laid down by the US.

Those who disagree with those rules and envisage a different kind of world order are also coming closer together. The One World of Pax Americana that has existed since the end of the Cold War is already history. US global dominance is still in place, but the peace – “pax” – has been shattered again. The new era is not a replay of the 20th century contest. It may be equally dangerous, but in its own way. Beijing and Moscow, while staying clear of creating an alliance, appear to assess the risks, identify credible objectives and build a strategy in coordination with each other and other like-minded nations. Major power rivalry is set to intensify.

The author is director of the Carnegie Moscow Center. [email protected]