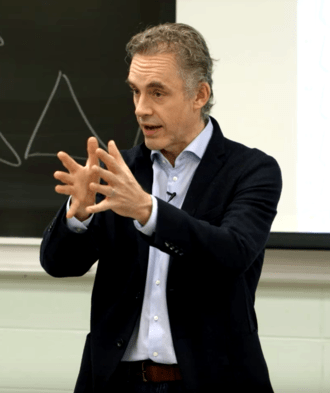 For Pewdiepie, aka the world’s biggest YouTuber, book reviews were a bit of a departure from his usual diet of snark and video games.

“I didn’t think I ever would have read a self-help book,” the 28-year-old told his 61m subscribers in a video posted in February. “It gave me a lot of new perspectives.”

The book was Dr Jordan Peterson’s 12 Rules for Life: An Antidote to Chaos. It’s a Sunday Times and international bestseller that has been devoured with particular enthusiasm by young men. It has been both praised and criticised for its core message of the value of individual responsibility and accountability, as well as for Peterson’s controversial views on things like popular protest movements, which he dismisses as ‘cult-like’.

Pewdiepie has courted controversy himself. The YouTuber faced outcry over a racial slur, a joke about joining ISIS and alleged anti-semitism. But he probably has one of the biggest youth audiences on the planet. He declared: “I will definitely take some lessons from this book.”

Others, such as the H3 Podcast which has 1.4m subscribers, and the even more popular Joe Rogan Experience podcast are also sold on Dr Peterson. He’s being talked about everywhere from 4chan (an anonymous message board) to anime forums. Dr Peterson even offered the 4channers a discount on his related self-help tool, the ‘Self Authoring’ programme – writing on Twitter: “Don’t stay in the underworld. Author your future.” (The merits of the programme – which is intended to help people “sort themselves out” – was the subject of a huge thread on 4chan.)

The book itself is a mix of science, psychology, and quaint advice, like “stand up straight”, and “tell the truth”. That, along with his hugely popular YouTube videos (50 million views and counting), a viral Channel 4 interview, and a public row over the use of gender-neutral pronouns, have propelled him spectacularly into the limelight.

The closest thing Dr Peterson’s followers currently have to a name is ‘lobsters’. The term is an ironic reference to the first chapter in Dr Peterson’s book, in which he presents his ideas on social hierarchies.

He explains that humans and lobsters share parts of a nervous system that is hundreds of million years old. Dr Peterson cites a study showing that, when crustaceans fight each other, their brains undergo long-lasting changes depending on whether they win or lose, making them more dominant or more submissive, respectively. In this way, a social hierarchy emerges among the lobsters.

“A third of a billion years ago, brains and nervous systems were comparatively simple,” writes Dr Peterson. “Nonetheless, they already had the structure and neurochemistry necessary to process information about status and society.” Dr Peterson’s interpretation of that seems to be that social hierarchies are natural.

He writes that everybody measures their position in society. If you’re of the highest status, then “you are a successful lobster, and the most desirable females line up and vie for your attention”.

@TheTopLobster, 33, is an Irish man who works in hospitality. He runs a Twitter account fronted by a macho, vermillion lobster. “I would call it an affectionate parody account,” he says. “I very much enjoy Peterson’s work, but I’m not a zealot.”

Nonetheless, he believes, “Peterson is tapping into something that looks to be missing from a great many people’s lives these days, e.g. a proper sense of responsibility and duty to yourself and those around you.”

Thirty-year-old @DominantLobster – a male data analyst from the Netherlands – agrees: “We hear too much about rights and how much we need more of that. I feel Peterson’s talking about responsibilities, not being a victim. The idea of taking on the unavoidable suffering of existence is almost completely missing in Western culture.”

Not everyone is sold on the lobster analogy. A UCL academic argued that Dr Peterson’s reasoning is dangerously reductive: “Believing that it is ‘natural’ that some people are ‘losers’ because that’s what lobsters do can have dire consequences,” wrote Leonor Gonçalves, a research associate in neuroscience, physiology and pharmacology.

It’s not difficult to see how believing that some people are of ‘naturally’ low status could harm the mental health of abuse victims, for example, or could encourage bullying – or worse.

Dr Peterson has been accused of providing “intellectual cover for bigotry” and some of his critics point to the approval he receives from figures on the fringes on the radical right, such as YouTube personalities Paul Joseph Watson and Mike Cernovich.

But some of Dr Peterson’s own statements have provoked intense criticism. “I think the idea of white privilege is absolutely reprehensible,” he has said. He’s also called Islamophobia, “a word created by fascists and used by cowards to manipulate morons”.

Dr Peterson claims he opposes both ends of the political spectrum: fascism and communism. He tends to refer to his political identity as a “classic British liberal”.

Dr Peterson’s advice is for all humans – ‘losers’ or not – to “stand up straight with your shoulders back”, like a dominant lobster.

His advice is not explicitly aimed at men. He recently claimed that 55% of his online audience is female. But this has not stopped him from facing accusations of misogyny thanks, in part, to his impatience with feminism, and statements such as “The idea that women were oppressed throughout history is an appalling theory.”

Dr Peterson doesn’t just advise people to ape dominant behaviour (by standing up straight and so on). He has also delivered some strong criticism.

“Men need to grow the hell up,” he said in the now-infamous interview with Channel 4’s Cathy Newman last year. “There’s nothing good about the people who don’t grow up.”

The laddish, misbehaving man-child has been a fixture of Western pop culture for several decades. He’s arguably epitomised by Judd Apatow’s blockbuster films; think Will Ferrell in Elf, Stepbrothers or Anchorman; Adam Sandler in almost everything; Jeff Daniels in Dumb and Dumber; Steve Carrell in The 40-Year-Old Virgin.

In one of his videos, he advises, “If having children doesn’t make you happy the answer isn’t, ‘Don’t have children’. It’s, ‘Don’t be stupid about being happy’. That’s the answer.”

One of the most significant unifying trends is probably a rejection of the emotional detachment that epitomised being ‘cool’, and the rise of ‘wokeness’ in its place.

To be ‘woke’ is to be self-consciously aware of your own and others’ privileges, and to care about social justice.

Dr Peterson also champions self-awareness – but for the purpose of self-improvement over changing the world.

In fact, he has said that he would prefer it if young people went on fewer protests, and spent more time working on themselves. Rule six of his book states: “Set your house in perfect order before you criticise the world.”

It remains to be seen whether the lobsters will move into the cultural mainstream – or flounder and retreat.

But from where they’re standing, the aimless meandering and achingly cool, emotionally detached posturing of the hipster seems more passé than ever.

This article was originally published on 17 April 2018.