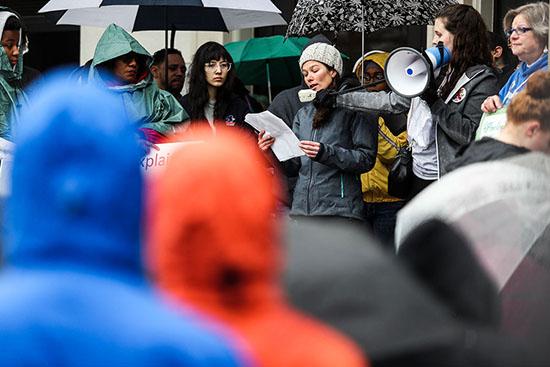 The #MeToo movement has empowered thousands of women to tell their stories of harassment and abuse throughout America’s workplaces. But advocates say women abused at home often face a more dangerous path.

—During the decade she lived with her boyfriend, Sara Elmer was surrounded by guns. Her partner legally owned a rifle, 12 handguns, and a shotgun, which he kept loaded under their bed. But these were not for their protection, she says. He used them to control and terrorize her.

“I was in survival mode every day,” says Ms. Elmer. “If I really thought about how much danger I was in, I don’t know how I could have gone through each day and made it through.”

Indeed, in the United States, close to half the number of women killed in violent homicides each year are fatally shot by their intimate partners, according to federal crime statistics. Add to this women who are shot and killed by other family members – up to 10 percent more, scholars estimate. (By comparison, intimate partners or other family members account for only 2 percent of men killed by guns.)

Elmer and other domestic violence advocates say that in the #MeToo era, when thousands of women have raised their voices to tell stories of abuse and harassment in America’s workplaces, those being abused behind closed doors still face a culture that makes it difficult to speak up.

Firearms add a deadly dimension to domestic violence, experts say. If a partner has a gun, there is a 500 percent greater likelihood that a woman can be shot and killed, according to a study in the American Journal of Public Health.

And when it comes to mass shootings – single incidents in which a shooter kills at least four or more people – the news media and others focus on motives of terror, mental illness, or random nihilism.

In fact, domestic violence accounts for about half of the number of people killed each year in mass shootings, and the vast majority of them are women. Between 2006 and 2017, domestic abusers accounted for 597 mass shooting deaths, compared to 517 deaths in public shootings in places like Sandy Hook, Conn. and Parkland, Fla. over the same period.

Domestic-violence experts say the lack of attention to the motives of domestic mass shooters reflects the cultural values that surround gun violence in intimate settings.

“Because domestic violence is so insidious and based on a pattern of power and control…you’re not going to know that right off the bat” that a mass shooting incident was an act of domestic violence, says Ruth Glenn, executive director of the National Coalition Against Domestic Violence.

Several domestic violence experts say the scant attention paid to these type of mass shootings, and the millions more women who are threatened with guns, reflects the public’s lack of education about domestic violence and the pervasiveness of victim blaming.

Experts are split about the effects of the #MeToo movement on domestic violence since it primarily involves abuse in the workplace.

So while Ms Glenn applauds the women stepping forward to expose the actions of powerful men in government and business, she argues against conflating the issue of domestic violence with sexual harassment in the workplace.

Still, others say that #MeToo has had a broader effect on culture. “What it has done is open the floodgates for people to talk about that experience, as well as other forms of abuse that people experience both at work and in their relationships,” says Toni Troop, the director of communications of Jane Doe Inc., a coalition of domestic violence advocates in Massachusetts.

But greater awareness alone is not enough to help women survive situations of violence, especially at the hands of gun-carrying partners or family members.

“Among those in the field, everyone is talking about [#MeToo],” says Joan Meier, a professor of clinical law at George Washington University. “But whether that’s going to have an impact on those third parties who have power, like judges, evaluators, observers, bystanders, reporters, or anyone else – that remains to be seen,” she says.

At the same time, #MeToo has underscored that women have long been disbelieved when they reported abuse, a reality that extends beyond the focus on the workplace and into the home.

“Batterers isolate their victims,” including controlling the flow of information, says Ms. Troop.

But that is not the only reason many women struggle to speak up and seek help in violent domestic situations, advocates say. There is also a more subtle and almost unconscious clash of society’s deepest values.

“There’s sort of this implicit belief in the case of domestic violence and killings in the home that maybe someone was triggered by something the victim did,” says Laura Niemi, a postdoctoral fellow in moral cognition at Duke University.

“This leads straightforwardly to this ‘victim blaming’ perspective where we think about domestic violence as something that happened because the victim deserved it. That they gave the perpetrator a good reason to harm them.”

As a social psychologist who studies how people make moral judgements, Niemi says there are “individualizing values” that cluster around the idea of protecting each individual’s human right to be unharmed and treated fairly.

But for most people, there are even more powerful “binding values” that protect the integrity of the most intimate bonds of society, especially those between family members and domestic partners. These values emphasize loyalty, respect for authority, and ideas of purity, Niemi says.

Yet these two values are often at odds with each other. Individualizing values are abstract and about ideals. Binding values are emotionally intimate and volatile, and actions deemed disloyal or disruptive are often considered grave violations of powerful bonds.

“There is such a strong assumption that what goes on in relationships is mutual and screwed up and personal, and it’s not a ‘system problem’ or even necessarily a gender problem, it’s an interpersonal problem,” says Meier.

Federal law prohibits felons or individuals convicted of misdemeanor domestic-abuse crimes from buying or owning guns. However, this law does not apply to dating relationships or ban guns during temporary protective orders, and it does not set procedures for removing guns from abusers.

Five states, including Washington, Oregon, and California, have passed “extreme risk protection orders” (ERPO) that take away legally-owned guns from anyone deemed a risk to themselves or others. Connecticut and Indiana have also passed similar laws. In early March, The New York State Assembly overwhelmingly approved an ERPO bill, although its fate in the Senate remains unclear.

Increased interest in ERPO laws comes after the Parkland school shooting. Scholars say such laws can be effective at preventing shooting deaths, but they require funding and personnel and must still clear legal hurdles.

“You can have a good law, but it’s only as good as its enforcement on the ground,” says Meier.

The legal system, she says, has to be self-enforcing. “You can’t put the burden on the petitioner who is either a domestic violence victim, or in these new laws, a ‘caring bystander,'” to appear repeatedly in court. Far better, she says, to coordinate with courts, police departments, and social-service agencies to protect women at risk.

“The systems should be talking to each other. They did one big thing,” she says of domestic violence victims or other witnesses who seek help. “Now the system has to do its job,” she says.

Glenn remains cautious about linking the #MeToo movement with domestic violence advocacy. Still, she knows the power of sharing stories in the battle against abusers. A survivor herself, she first told her story in 1994 while volunteering at a domestic violence organization – two years after she was shot by her abuser.

Another volunteer asked her to share. “She said: ‘I think your story is worth telling. And I think you’ll feel better. And I think you can educate with your story,'” says Glenn. “And I never stopped.” She has since spoken about her experiences to legislators in Colorado and in the US Congress.

Elmer lived with her abusive partner from 1990 to 2000, petrified of leaving, in part because of his large stockpile of weapons.

Now, she often speaks at colleges. At the end of her talk, she tells students she used to be in their seats, literally.

“You don’t want to believe that could happen to you. It happens to someone else; over there who doesn’t look like me, who isn’t like me, who has a totally different background,” she says.

Making that connection allows people to receive her story rather than distance themselves. And students often approach her later, saying: “Can I talk to you about something? I’ve never said this to anyone before.”

She ends each talk with the same message: “You can help people like me.”