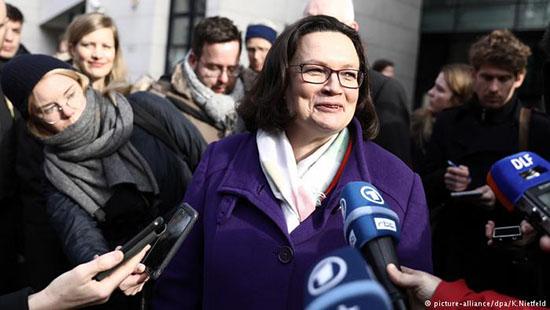 “We are the power of the future and of progress,” Andrea Nahles told the German press ageny DPA on Friday. In two days’ time, she is set to become the first female leader in the 155-year history of the country’s Social Democratic Party (SPD).

Nahles has been tasked with steering the party back to its left-wing progressive roots after four years as the junior partner in a coalition government with Chancellor Angela Merkel’s Christian Democrats (CDU) led to historically low numbers in last September’s general election.

Nahles’ rousing speech at a party convention in January is credited with convincing party members to approve a renewed coalition with Merkel.

Since then, much to the party’s dismay, the SPD has been neck and neck with the far-right Alternative for Germany (AfD) in some opinion polls.

“I believe I can do it, and I can work well with the team to accomplish something good,” Nahles said.

The former Labor minister is taking over from former leader Martin Schulz, who Nahles accused of being too far from the grassroots of the party. The pair also differed greatly over the country’s social welfare system, with Schulz advocating for the complete repeal of Germany’s controversial benefits system known as Hartz IV.

But not everyone in Germany is sure the 47-year-old former leader of Jusos, the youth wing of the SPD, is up to the task of making the SPD relevant again. According to the latest Deutschlandtrend poll, 47 percent of Germans are skeptical that Nahles is up to the task and only 33 percent believed she could do it. However, SPD supporters were a little bit more optimistic for her chances for success at around 50 percent.

When elected, Nahles will face the challenge of sharpening her party’s profile in comparison to the CDU, once again the SPD’s senior partners in Germany’s ruling coalition government.

Nahles will replace interim leader Olaf Scholz after the vote on Sunday. While she faces a challenge from Simone Lange, the mayor of the city of Flensburg, Nahles is widely considered the favorite.