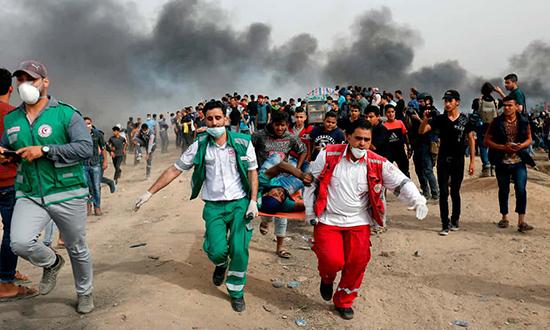 Hazem Balousha in Gaza City and Oliver Holmes in Jerusalem

Israeli troops stationed on the frontier with Gaza have shot dead two Palestinians and wounded more than 40 people during the fourth week of Friday protests, all of which have been met with lethal force.

Thousands of residents from the coastal strip demonstrated near the metal perimeter fence, some burning tyres and throwing rocks. Several young Palestinian men attempted to fly home-made kites with small cans of petrol attached to their tails into Israeli territory.

Israeli forces stations on sandbanks behind the frontier fired teargas and live ammunition, shouting over loudspeakers in Arabic, warning people not to move close to the fence.

Earlier in the day, Israel had airdropped leaflets into the area, telling residents that Gaza’s rulers, Hamas, which supports the movement, “is taking advantage of you in order to carry out terror attacks”.

It added: “Stay away from the terror instigators and violent riot orchestrators.” Rights groups have condemned Israel’s use of live ammunition while the Israeli military has warned that people approaching the perimeter could potentially be shot.

In close to a month of rallies, small groups of protesters have attempted to cut, set fire to or break the fence. Many have been shot in the act. Others, however, have been struck with bullets deeper into Gaza, far from the perimeter.

Fridays, the first day of the weekend in Gaza, have garnered the highest turnouts of people in what organisers say will be a six-week movement, ending in mid-May when Palestinians commemorate their displacement around the time of Israel’s founding in 1948.

Marches have called for a “right of return” for Palestinian refugees and their descendants to what is now Israel and to end an air, land and sea blockade.

The Israel defence forces estimated there were 3,000 Palestinians involved on Friday, a fraction of previous attendances.

It said several of the flaming kites had crossed into Israel and were extinguished, and forwarded photos of two kites, one painted with the Palestinian flag and one with a swastika.

At least 30 people have been killed and hundreds have been wounded by gunfire since the protests began, Gaza officials have said. The two Palestinian men who died on Friday were aged 24 and 25, Gaza’s health ministry said.

The killings have drawn international criticism against Israel, including calls from the United Nations and the European Union for independent investigations, requests Israel has rejected.

The actor Natalie Portman, who holds Israeli and US citizenship, pulled out of a major award ceremony in Israel, a move widely interpreted as a reaction to the bloodshed in Gaza.

Portman’s representative did not specifically mention Gaza as a reason for her decision but said that “recent events in Israel have been extremely distressing to her and she does not feel comfortable participating in any public events in Israel”.

Israel says its troops have been shot at and explosives have also been used in attempts to breach the border. No Israeli civilian or soldier has been harmed in the demonstrations.

The main organisers of the protests have called for a peaceful movement by Gaza’s two million residents and condemned the use of stone-throwing and tyre-burning.

Blockaded since 2007 by Israel and Egypt, which severely restrict access for goods and people, Gaza has suffered from debilitating power outages, a sewage crisis and shortages of medical equipment. Punitive measures against Hamas imposed by the rival Palestinian Authority have added to an already-dire humanitarian situation.