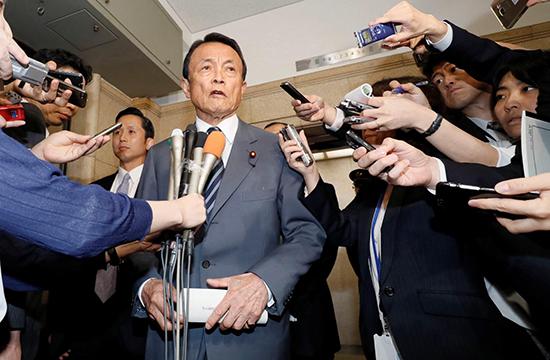 WASHINGTON (Reuters) – Japan has warned its G20 counterparts that protectionism and exchange of retaliatory measures will disrupt financial markets and heighten volatility.

“I told my G20 counterparts that no country would benefit from inward-looking policies based on protectionism,” Japan’s Finance Minister Taro Aso told reporters after a dinner gathering of the G20 finance leaders on Thursday.

In a speech to the G20 finance ministers and central bank governors, Aso stressed the need to solve global imbalances under a multilateral, not a bilateral, framework.

But there were no specific discussions on exchange-rate moves at the G20 gathering, Aso said.

Fears of a global trade war are seen dominating talks at the G20 gathering, with the International Monetary Fund warning that protectionism could hurt otherwise solid global growth.

Aso’s comments followed a summit earlier this week between Japanese Prime Minister Shinzo Abe and U.S. President Donald Trump, which exposed differences between the two nations on how to frame trade negotiations.

The two leaders agreed to intensify trade consultations to expand bilateral investment and trade. But while Trump reaffirmed his desire to address trade imbalances with Japan through a bilateral trade deal, Abe repeated his call for the United States to rejoin the multilateral Trans-Pacific Partnership (TPP) deal.

Aso and his U.S. counterpart Steve Mnuchin will meet for bilateral talks on Friday on the sidelines of the G20 and IMF meetings, according to Japan’s finance ministry.