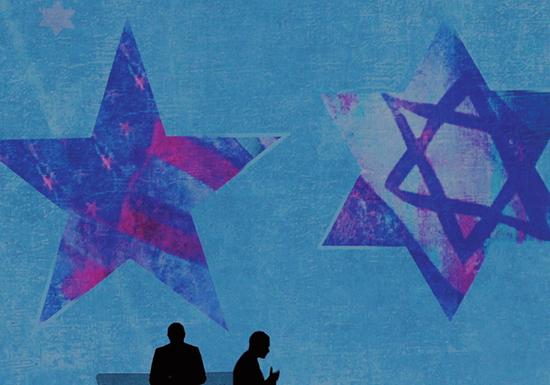 Anti-Israel activists on the Left are trying to wrench control of the Democratic Party while white nationalists on the Right treat Zionism as a cover for their racism.

WASHINGTON – In January, one of the nation’s premier research centers published a poll that caused something of a tizzy. It had found, according to its press release, a wider gap between Democrats and Republicans on the Israeli- Palestinian conflict “than at any point since 1978.”

The Pew Research Center – which polls Americans on this question every year – discovered more Republicans sympathetic toward Israel in the context of the conflict than at any other moment in modern times. Democrats, on the other hand, were found increasingly divided, now equally likely to support the Palestinian cause, ostensibly at Israel’s expense.

And belief in the possibility of peace is correlated with age: the younger you are, the more hopeful you are likely to be that an agreement can be reached.

The poll seemed to confirm long-held fears over increased politicization of Israel in the United States – a core national security concern for the Israeli government, which relies on bipartisan support in Congress for foreign assistance, defense aid and diplomatic support. The basis of the poll was called into question by Democrats who consider themselves fervent supporters of the Jewish state and also advocates of Palestinian statehood, including former US ambassador to Israel Daniel Shapiro and the Brookings Institution’s Tamara Cofman Wittes.

“The poll question is faulty because sympathy for Palestinians should not imply hostility to Israel, nor should sympathy for Israel require disregard for the fate of Palestinians. A solution to their conflict enshrining two states for two peoples is the outcome most preferred by Americans regardless of party,” the pair wrote in The Atlantic monthly shortly after Pew published its findings.

“The strong push in the poll question’s construction is toward dichotomy: Which side are you on?” they continued.

“Thus the responses, by design, suggest greater polarization than perhaps exists in reality.”

Still, senior members of the Israeli government and Israel advocacy organizations took the survey findings seriously. Top Israeli officials scavenged historical polling data looking for cause for comfort. And they found one trend in which they took heart: an ebb and flow in support for the Jewish state over time seemingly correlated not with particular governments in power, either in Israel or America, but on watershed events that have shaped the Middle East.

Two major inflection points in data were the 1991 Gulf War and the September 11 attacks, both of which aggravated partisan feelings on the Israeli-Palestinian conflict. But the fact that these spikes in partisanship over Israel ultimately subsided offers reason to believe that this moment, too, shall pass, several officials expressed in conversations with The Jerusalem Post. The Republican-Democrat gap also appeared to them driven less by a drop in support among Democrats (calculated at an 11% decline since 2001) than by a dramatic increase in support from Republicans (by 29%).

Yet what might be the historical event that has led to this recent divide – one that has sustained itself, broader than ever, over eight long years? Officials struggled to say. But they noted no statistically significant change in the annual data between the year Prime Minister Benjamin Netanyahu delivered his dramatic speech to Congress on Iran, confronting Democratic president Barack Obama’s top foreign policy achievement, and the year prior.

More significantly, Israel advocates on both sides of the aisle believe they have identified a change at the fringes of both parties in attitudes toward Israel and the cause of Zionism – changes of concern for a host of reasons.

On the Left, polling and grassroots campaigns agree there has been an increase in hostility toward Israel within the progressive movement, which identifies the cause of Zionism not with core liberal values but with the oppression of a minority group – the Palestinians.

The American Israel Public Affairs Committee touched on this in its appeal to liberal Democrats at the start of its annual conference in Washington.

“To my friends in the progressive community, I want you to know we are partners in this project,” AIPAC’s president, Mort Fridman, told the conference, attended by over 18,000 Israel activists. “The progressive narrative for Israel is just as compelling and critical as the conservative one.”

“There are very real forces trying to pull you out of this hall and out of this movement, and we cannot let that happen,” he continued. “We will not let that happen!” Last fall, a Democratic Jewish organization calling itself the Jewish Democratic Council of America launched with a mission to reengage Democrats on the positive politics of Israel. Ron Dermer, Israel’s ambassador to the US, addressed its launch event, where he characterized bipartisan support for the state as a national security asset.

“Everyone should understand bipartisan support is a strategic value,” Dermer said.

“You cannot fly a plane with one wing, and you cannot have a strong alliance between the US and Israel without strong support in both parties.”

And yet on the other hand, within the far Right, the Anti-Defamation League tracked an increased convergence of fervent antisemitic rhetoric from neo-Nazi, white supremacist and white nationalist hate groups with claims of support for the Zionist cause – a belief that Israel is an example of the sort of a ethno-nationalist state they seek to replicate in the US homeland.

Richard Spencer, a leader of the alt-Right racial extremist movement, said as much in an interview following a rally of neo-Nazis in Charlottesville, Virginia, last summer.

“The reality is the Zionist concept has been the target of Jew haters from both the Right and the Left for years,” said Jonathan Greenblatt, CEO of the ADL, in response to Spencer at the time. “The infamous ‘Zionism is racism’ resolution of the UN General Assembly in 1975 was an initiative of the Soviet Union. Today we see groups and individuals on the Left – recently the Chicago Dyke March and Linda Sarsour – defaming and delegitimizing Zionism. On the far Right, there is a long history of ZOG – the accusation that the US has been captured by the ‘Zionist Occupied Government.’” The sharp opposition voiced from those on the far Left may appear more brazenly hostile to Israel; but equally threatening, if not more so, is a form of Zionism expressed by the likes of Spencer and his ilk on the far Right.

And the value of their form of “support” for Israel’s existence is not likely captured by pollsters.

“In this heightened political time,” Greenblatt continued, “we must have zero tolerance for those who seek to divide and vilify the principles which we hold dear, which include living proudly and securely as Jews in America and defending the legitimacy of the Jewish State of Israel. There will always be those on both extremes who seek to attack or undermine those core principles.”