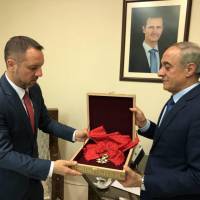 DAMASCUS – Syria returned to France the prestigious Legion d’Honneur it gave to President Bashar Assad, saying Thursday he would not wear the award of a “slave” to America.

Assad was decorated with the Legion’s highest rank of Grand Croix, or Great Cross, by former President Jacques Chirac in 2001, shortly after taking power following the death of his father, Hafez Assad.

The office of French President Emmanuel Macron said on Monday that “a disciplinary procedure for withdrawing the Legion d’Honneur (Legion of Honour) is underway.

Syria said it had returned the award after France took part in airstrikes over the weekend against regime targets over an alleged chemical weapons attack.

“The ministry of foreign affairs … has returned to the French republic … the decoration of the Grand Croix of the Legion d’Honneur awarded to President Assad,” said the Syrian foreign ministry.

It said in a statement that the award was returned to France via the Romanian Embassy in Damascus, which represents French interests in Syria.

A source close to the presidency, quoted in the statement, said the decision comes after the “participation of France in the tripartite aggression alongside the United States and the United Kingdom against Syria on April 14.”

“It is no honor for President Assad to wear a decoration attributed by a slave country and follower of the United States that supports terrorists,” the statement said.

France grants the Legion d’Honneur to around 3,000 people a year, including 400 foreigners recognized for their “services rendered to France” or for defending human rights, press freedom or other causes.

Assad has been accused of a series of chemical attacks on his own people during the brutal civil war, which has torn Syria apart since 2011.

He has become a pariah for Western powers while maintaining the support of Russian President Vladimir Putin, whose military intervention in the conflict gave Assad the upper hand against rebel opposition groups.

Putin himself is also a recipient of the Legion’s Grand Croix, decorated by Chirac in 2006.

It is not the first time Macron has stripped a foreigner of France’s highest honor, having moved to withdraw the award from Hollywood mogul Harvey Weinstein after a series of accusations of sexual harassment and rape.