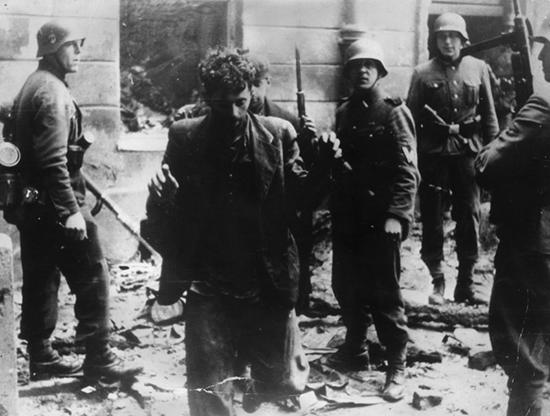 Seventy-five years ago Thursday, on April 19, 1943, a small group of starving young Jews trapped in the Warsaw Ghetto mounted their now legendary rebellion against the Nazi juggernaut. Defying all odds these desperately under-armed militants held off the German war machine for nearly a month.

This moment of bravery, of courage in the face of certain death, seems as though it were a David versus Goliath story, tailor-made for an American audience. It is no surprise that the dramatic uprising and its doomed but valorous insurgents have been vibrantly recalled across creative boundaries — from comics to television to Broadway — but that embrace of the story sheds light on how a good number of Americans want, and need, to remember the Holocaust.

Bestselling author Leon Uris provides a case in point. Uris followed up his blockbuster Exodus, a historical novel about the founding of the State of Israel, with Mila 18, a fictionalized portrayal of the uprising. Wildly popular, Mila 18 spent 33 weeks atop the U.S. national bestseller list. As the dust jacket announces, “The hero of Mila 18 . . . is the Jewish people as represented by this handful of doomed men and women. It was fortitude and heroism like theirs that led to the creation of the state of Israel and the fulfillment of a two-thousand-year destiny.” In personal letters and interviews, Uris made it very clear that he wrote Mila 18 to undermine the unfortunate belief that Jews went to the gas chambers like sheep to slaughter. His goal, using the uprising as a catalyst, was to create a memory of defiance and dignity rather than one of meekness, anguish, and shame. Uris was hardly alone in his thinking.

On the surface, the reasons that Americans, Jewish and otherwise, cannot resist the resistance are fairly clear. For many, this seminal event offers a glimpse of hope, misguided as it may be, amid a torrent of despair. The various repetitions of the uprising, in its purest form of physical, heroic resistance, satisfies a desire for those of us who were not there in the abyss, to grasp on to something less horrific than systematic deprivation, torture, and mass genocide.

There is incredible longing attached to the uprising, and the honor, pride and dignity it engenders, which goes part and parcel with a desperate yearning for the Holocaust to have a different ending. Some so vehemently desire a different ending within the Holocaust’s desolate landscape that the worst parts of the uprising receive airbrushing or are glossed over completely. In reality, the Warsaw Ghetto is about much more than a heroic but futile Spartacan revolt.

After studying dozens of representations of the story, I became privy to the “other” Warsaw Ghettos: The pitiable ghetto of smuggling children broken in half by ruthless men, and the beaten and humiliated elderly. The ghetto that slowly discloses the bureaucracy of degradation – where walls are first built, then prayer forbidden and deportation imminent. I confronted a conflicted ghetto that permits access to Jews behaving badly and sympathetic Nazis, and the teeming, festering ghetto where starvation and disease run rampant. Then again, the humanity of the ghetto found pride of place in many portrayals: Despite punishment by death, the study of Torah continued and was taught to the children. A good number of the populace participated in self-help organizations and attempted to create beauty through art, music and other cultural pursuits. Families, by lineage or by circumstance, loved and quarreled, sometimes more deeply and bitterly in light of their dire situation, but in the most sanguine accounts they remained families to the end.

But we also have proof that it’s possible to depict the ghetto without ignoring these complexities. For example, a decade before Uris tackled the subject, John Hersey wrote about the ghetto in his historical novel The Wall, published in 1950 and also extremely popular in its own day. Hersey doesn’t transform the resistance into a Western, instead setting his sights on family relationships, and the many layered and contradictory personalities of those trapped in their walled prison. The first edition dust jackets of the books vividly convey the differences between Uris and Hersey’s approaches. A drawing of a young partisan with a rifle strapped on his back, heavily shadowed on the right side of his body, takes up the top half of the cover of Mila 18. That fighter prepares to throw a bottle bomb, alight with a dash of red – the only color in this otherwise black-and-white rendering. This representation of strength and resistance conspicuously contrasts with the original cover of The Wall. An ominous wall dwarfs the tiny Jewish figures, lightly drawn in white, nearly fading out of existence before our very eyes.

If we only remember a tidy, heroic version of the Warsaw Ghetto then we ignore more of the ghetto experience than not. The uprising lasted 28 days and the rebels numbered around 750, yet about 500,000 Jews were confined in the ghetto over two and a half years.

After eight years of researching and writing about the Warsaw Ghetto, and with the 75th anniversary upon us, I will surely think about the ghetto’s heroes – a band-aid for the Holocaust’s gaping wound. I understand why Americans have claimed the uprising this way, and why the nuances of the ghetto have been forgotten. Today, though, on this milestone anniversary, I also mourn individuals, over and above a mythologized revolt, as I remember the ghetto in all its complexity.

Samantha Baskind is the author of The Warsaw Ghetto in American Art and Culture, available now.