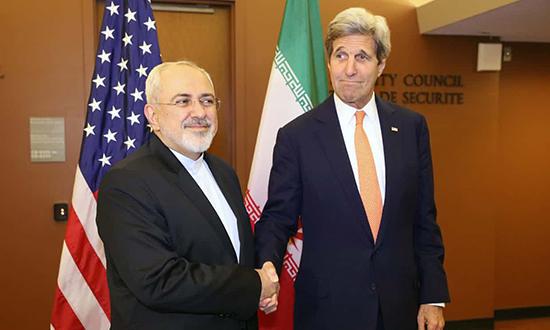 Iran’s top diplomat has issued a stark warning to Donald Trump that if he follows through on his threat to scrap the 2015 nuclear agreement in three weeks’ time he will have to “face the consequences” that will not be “pleasant” for the United States.

Iran’s foreign minister, Mohammad Javad Zarif, painted a bleak picture of the prospects for survival of the nuclear deal, which Trump has threatened to tear up on 12 May by refusing to waive a set of sanctions – a move that is integral to the agreement. Zarif indicated that should the US effectively pull out, Iran would refuse to stay inside the deal alongside the Europeans, calling that option “highly unlikely”.

An option actively being considered by Tehran, by contrast, was to withdraw entirely from the deal by returning to uranium enrichment. Other proposals being floated in the Iranian parliament, Zarif said, involved more “drastic” measures – though he would not specify what those entailed.

In an interview with reporters at an Iranian official residence overlooking New York’s Central Park, Zarif said that the Trump administration had the “option to kill the deal, but they have to face the consequences … We will make our decision based on our national security interest when the time comes, but whatever it is it will not be very pleasant for the United States, I can say that.”

Trump indicated in January that he would refuse to sign the sanctions waiver when it came up for its next renewal on 12 May unless Iran agreed to accept a raft of new restrictions. But Zarif made it clear that the Iranian regime had no intention of accepting any new demands, and turned the argument around by accusing Washington of already violating the deal, known as the Joint Comprehensive Plan of Action (JCPOA).

He accused the US of doing everything in its power to prevent Iran from engaging economically with the rest of the world, thus blocking Tehran from benefitting from the easing of sanctions permitted under JCPOA. He said that and other moves by the US amounted to a breach of the deal that had been going on for the past 15 months.

“I don’t think that a country that has been in breach for at least the last 15 months is in a position to make any new demands,” he said.

Zarif is in New York to attend a UN meeting on peace-building. In the course of a six-day stay in the city he will have a one-on-one audience with the UN secretary general, Antonio Guterres.

As the final countdown begins to the next sanctions waiver deadline, and amid Trump’s grand posturing, European states are scrambling to see what can be done to salvage matters should the US president stand by his word and pull the rug out from under the deal. But Zarif gave very little sense of hope that anything would be possible.

He said it was “highly unlikely” that Iran would stay inside the JCPOA if the US effectively pulled out. “It’s very important for Iran to receive the benefits of the agreement – there’s no way that Iran would do a one-sided implementation of it.”

He said France and Germany could try and persuade the US to deflect from the collision course it was on, but he predicted such efforts would be “fruitless”. And he warned of the danger to world peace posed by Trump’s stance.

“The US is sending a very dangerous message to the people of Iran and the people of the world. It says you never come to an agreement with the US.

“The situation is creating an impression globally that agreements don’t matter.”

The Iranian regime has been heavily criticised in recent months for its role in propping up the Syrian president, Bashar al-Assad, despite his complicity in the death of thousands of civilians and his willingness to use chemical weapons against his own people. Zarif insisted that Iran was not engaged in the Syrian civil war to assist Assad but to combat the threat of extremist groups, notably Isis.

He went on to question claims by western governments that Assad had launched poison gas attacks against the Syrian town of Douma earlier this month, killing at least 40 civilians. Zarif said there was insufficient evidence from the actual sites of the attack to reach that conclusion – while glossing over complaints that international inspectors had been prevented from reaching Douma for several days by the Syrian regime and Russia.

Zarif faced strong questioning about the apparent build-up of permanent Iranian military bases in Syria, and whether the long-term ambition was to prepare for conflict with Israel. He denied there were any Iranian bases inside the country, claiming that his nation’s presence was limited to military advisers stationed at existing Syrian bases.

He also denied that Iran operated aerial drones inside the country.

When asked about the recent Israeli airstrike against the T4 Iranian base east of Homs earlier this month that appeared designed to reduce Iran’s aerial capabilities, he said: “T4 is not an Iranian base, we don’t have a base in Syria.”