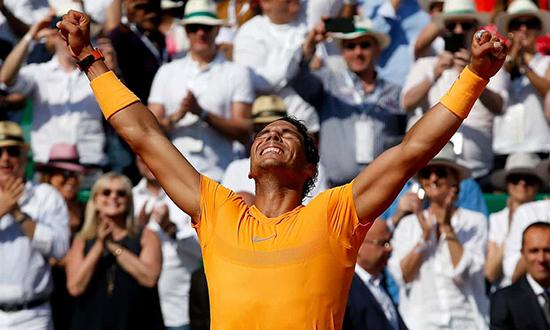 The world No 1 recovered from going a break down early in the first set to win 6-3 6-2 in 93 minutes and has now won 36 consecutive sets on clay, a run which stretches back to the first round of last year’s French Open.

None of Nadal’s opponents have won more than four games in any of those sets, a statistic Nishikori looked like changing when he broke for a 2-1 lead at Monte Carlo Country Club.

However, Nadal had other ideas and broke straight back on his way to winning five of the next six games, the 31-year-old then broke Nishikori twice more in the second set to seal a 31st Masters 1000 title, one more than Novak Djokovic.

Nadal said: “I want to thank all my team and my family. We had some tough moments during the last five months after a couple of injuries in a row. It’s great to have a group of great people behind me. I can say thank you very much always for being there and supporting me when I really need it.

“It’s always special for me to be back here, having this trophy. It’s one of the most important events of the year for me.”

After retiring with a hip injury during his Australian Open quarter-final against Marin Cilic, Nadal withdrew from the Mexican Open, Indian Wells Masters and Miami Open due to the problem.

Britain’s wait to play in the World Group will continue after they were beaten 3-2 by Japan in their promotion play-off – Konta and Watson losing the deciding doubles rubber to Miyu Kato and Makoto Ninomiya 3-6 6-3 6-3.

Anna Smith and debutant Gabi Taylor were the original nominations for the doubles but Keothavong replaced them with the more experienced pairing after Watson lost Sunday’s second singles match.

“We are gutted about the result. One day our opportunity will come,” Keothavong said. “If you keep knocking on the door, it will eventually open. It wasn’t to be this year but who is to say it won’t be next year.

“I’m proud of the effort both Jo and Heather put into the singles and doubles. Despite the short turnaround time I have no doubts that was the right decision for them to play the doubles.”