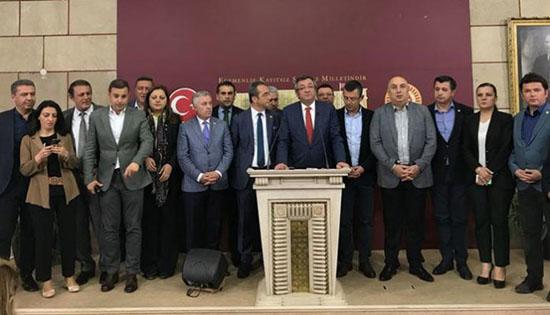 Fifteen deputies from the main opposition Republican People’s Party (CHP) have resigned and joined the İYİ (Good) Party as part of a tactical move to enable the new party to run in snap presidential and parliamentary elections on June 24, Cumhuriyet reported.

The move came days after a secret meeting between CHP Chairman Kemal KIlıçdaroğlu and İYİ Party Chairwoman Meral Akşener for a possible alliance in the upcoming elections.

The move will pave the way for Akşener to be nominated as a presidential candidate by her party instead of having to collect 100,000 signatures.

“This is a step to remove a trap that was set against democracy,” said Bülent Tezcan, CHP spokesperson, during a press conference at Parliament on Sunday.

“The deputies will be remembered as the heroes who saved democracy.”

CHP and İYİ Party officials held a meeting on Sunday before the decision was announced.

The Supreme Court of Appeals Prosecutor’s Office on April 20 submitted to the Supreme Election Committee a list of parties including the İYİ Party that can run in the elections, the İYİ Party stated on Saturday, Cumhuriyet reported.

According to the report, nine other parties in addition to the İYİ Party will have right to run in the presidential and parliamentary elections on June 24, 2018.

President Recep Tayyip Erdoğan had said on Saturday that a decision about the İYİ Party would be taken by the Supreme Court of Appeals Prosecutor’s Office and the Supreme Election Committee, and that he would respect the decision.