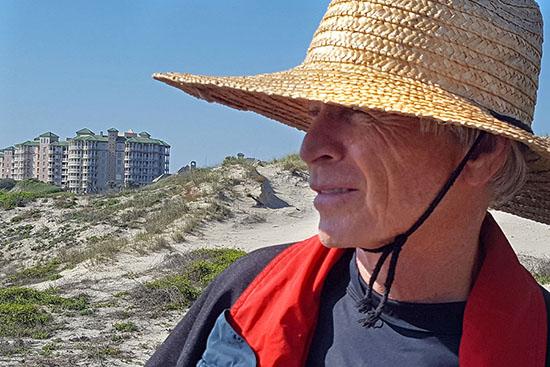 A new law passed in March sets limits on public access to private beaches. Some conservatives say private beaches should be sacrosanct, pitting them against advocates for customary-use access along Florida’s coastline.

FERNANDINA BEACH, FLA.—With his straw hat, rubber waders, and a quartet of 12-foot fishing poles, Peter Schilling is the modern version of an ancient archetype: the surf fisherman, casting knee-deep in the ocean foam.

At least twice a week, Mr. Schilling casts the breakers for pompano, whiting, or spotted trout, driving up to Amelia Island from his home in Jacksonville.

And like millions of beach lovers throughout the United States, Schilling understands in his gut what the Florida Supreme Court declared in 1939,  that the beaches of the Atlantic ocean are “a public highway” for pedestrians and bathers who enjoyed ancient customary rights to them.

For lot of beachside landowners, however, this romantic view of the beach as public thoroughfare is a bygone relic. They really don’t want a guy in rubber waders casting in their breakers – or loud, litter-dropping spring break revellers.

“Move or I’ll call the cops!” some have said, according to Schilling. “It’s happened to me a few times. I guess I’m blocking their view,” he says. “I just shrug and say, ‘Okay, call the cops.'”

The debate over public access to Florida’s beaches has been reaching hurricane levels in recent years. Climate change, rising sea levels, and the impact of recent storms have been shrinking the white necklace of beaches circling the Sunshine State, even as its population continues to grow and beachfront property values keep climbing.

The result, says Florida beach advocate Holly Parker, is a growing number of “really volatile conflicts on the beach: fencing off sand all the way to the water, pouring concrete posts and putting No Trespassing signs up, fistfights between tourists and homeowners,” she says.

Such tensions have simmered here for decades, as more and more beachfront mansions and developments blocked historic access paths. But Florida’s current debate echoes a larger clash of values that other states have confronted on their beaches.

In many coastal areas, observers say, wealthy municipalities and private homeowners’ associations have been throwing up more legal and physical barriers to public access, so as to create exclusive and marketable beachfronts.

States like Texas, however, have pushed back. After developers and private owners began restricting beach access, 77 percent of Texas voters approved a constitutional amendment for “the right of the public, individually and collectively, to access and use the public beaches bordering the seaward shore of the Gulf of Mexico.”

Courts in New Jersey, Michigan, and California have also sided with public access rights to national treasures, invoking the “public trust doctrine” that holds that government must protect natural and cultural resources which all citizens have a right to enjoy.

And states like Hawaii and others have long asserted a “common law right shared by residents and visitors alike.” Dating back to Roman times and incorporated into English common law and then transported to the American colonies, it holds sacrosanct that everyone has “customary use” of land with the ebb and flow of tidal waters.

As Florida’s highest court put it in its 1939 ruling, “There is probably no custom more universal, more natural or more ancient, on the sea-coasts, not only of the United States, but of the world, than that of bathing in the salt waters of the ocean. Many are they who have felt the life-giving touch of its healing waters and its clear dust-free air.”

“The beach is a powerful symbol in Florida – it is all things to all people,” says Gary Mormino, a history professor at the University of South Florida and author of “Land of Sunshine, State of Dreams.” “But wealth is also privileged in Florida. And given that living on the beach is a fabulously expensive luxury, it must gnaw on property owners that they have to share their backyard with the unwashed.”

Private property and customary use

It specifically bans municipalities from invoking “customary use” to forbid owners from blocking off their land. Now the onus is on municipalities to sue landowners and prove that public access to their private beachfront is “ancient, reasonable, without interruption and free from dispute.”

“If you’re going to take away somebody’s property, you have to do it through the courts,” said Sen. Kathleen Passidomo, a Republican representing Naples, in March. “To me, it’s just appalling that a local government could do this.”

Still, she noted that “this problem is not going to go away, and it’s going to happen up and down the coast” due to continued erosion.

In response, a growing number of coastal counties are readying court battles to secure beach rights for the public before they are lost to time and tides. At its heart, this battle pits an older idea of public rights against a modern notion that private property rights trump communal claims.

“Property owners often conceive of property as a monolith – either you own it or you don’t,” says law professor Alyson Flournoy, an expert on beach rights at the University of Florida in Gainesville. “But property law is really about relationships among people with respect to land. Often many different people have interests in a single piece of land, and that is very true of property at the water’s edge.”

While over 60 percent of beachfront property in Florida is privately owned, over 63 percent list the beach as their favorite recreational activity. And only 2 out of every 10 Floridians like the idea of cordoning off beaches for the enjoyment of landowners alone. That said, the new law has been misunderstood as a bid to privatize public beaches, which it is not, says Prof. Flournoy.

A controversy in Walton County

The new law had its genesis, in part, in a controversy that erupted in Walton County in Florida’s panhandle. There, beachgoers often rub elbows with the likes of country music star Kenny Chesney. But unbridled growth in communities like Seaside has irked property owners who find cigarette butt mounds on their beaches and are unswayed by appeals to ancient principles of waterfront access.

Recognizing the fallout from rapid development, county commissioners paid for a wide-ranging study from a former state historian. The result was a “customary use” ordinance that kept beaches open to the public.

Landowners sued, but lost. Yet the case reverberated throughout the state, where conservative lawmakers and advocates for strict private property rights seized on other local clashes to attack the common law ideal and pave the way for the new law.

“To blanket-take property from people who own it and have a title to it, without compensation or due process, really violates most fundamental aspects of property rights,” said former Arkansas Gov. Mike Huckabee (R), now a Walton County resident, during a talk in Bonita Springs earlier this year.

The bill appeared this year as the Florida legislature addressed a number of “home rule” issues, such as a proposal to ban municipalities from passing tree ordinancesthat curb the ability of property owners to shape the communal canopy.

For retiree Jim Stoner, who’s logged thousands of miles walking barefoot on Fernandina Beach and gathering more than 8,000 shark teeth washed up by the tide, the law is “about the poor and the rich.” He adds, “some people just think they own everything.”

Down the coast in Flagler County, local officials are among those gearing up for a fight to preserve public access after the Real Property Act takes effect on July 1. Many here, too, appeal to a romantic ideal that many Floridians still hold dear.

Al Hadeed, the county attorney who lives in Bunnell, says that beachgoers in this largely rural county “walk, they hike, they fly kites, they picnic, they engage in photography, and it’s a very coquina beach. We also have a lot of wildlife, because we don’t have wall to wall condos running up and down the beach.”

Ahead of July 1, county commissioners are scrambling to clarify legal rights to dune protection. Last Monday the commission held an emergency meeting, hoping to streamline an ordinance and fast-track a $25 million project to fix their beach’s extensive hurricane damage.

“This new law is changing the calculus, so now people might come in and wall off that beach,” says Mr. Hadeed. “What we’re talking about now is really trying to preserve the status quo, no fence obstruction or anything that impairs or impedes public access. That is how the beach exists today and has existed for eons.”