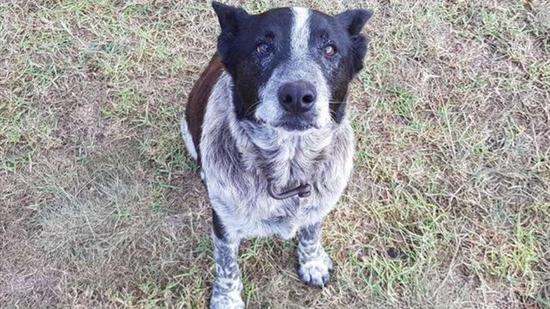 Australian police have praised a dog for remaining with a three-year-old girl as she spent a night lost in bushland.

The girl, Aurora, had been the subject of a large search after she wandered away from her home in Queensland.

She was followed by her family’s 17-year-old cattle dog, Max, who is partially deaf and blind.

The dog stayed with the girl for 16 hours before relatives found them on a hillside on Saturday morning.

Aurora’s grandmother, Leisa Marie Bennett, said she had heard the girl call out from the location, about 2km (1.2 miles) from home.

“I shot up the mountain and when I came to the top, the dog came to me and led me straight to her,” she told the Australian Broadcasting Corp.

Relatives said Aurora had taken shelter with the dog under a rock as temperatures dipped to 15C (59F). She suffered only minor cuts.

More than 100 emergency workers and volunteers had taken part in the search in Queensland’s Southern Downs.

“At three years old, I would imagine that the young child would be very scared and frightened through the night and very cold,” Insp Craig Berry said.

“You can hope the dog was good company for the child and kept her warm. It’s a positive outcome.”

Max deserves all the treats!

Older dogs particularly value human contact, said Prof Paul Creevey, who cited it as one reason why Max stayed with the girl.

Prof Creevey, a University of Sydney animal behaviour expert, said the dog would have sensed the girl’s distress.

“If the young girl was crying, it’s likely the dog would have responded in ways that would have comforted her,” he told the BBC.

“Remaining with her and standing by her would have been number one.”