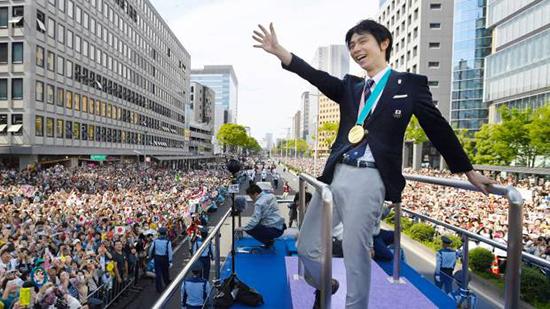 SENDAI – More than 100,000 people turned out to cheer Yuzuru Hanyu, who won a second consecutive men’s figure skating gold medal at the Pyeongchang Winter Olympics, as he paraded through the streets of his hometown of Sendai on Sunday.

According to organizers, about 108,000 adoring fans packed the 1.1-km stretch of street in downtown Sendai, through which the 23-year-old superstar was paraded, standing on a makeshift stage built atop a flatbed truck.

“I’m so happy to be able to come back here with this gold medal and say ‘I’m home’ to people in Sendai,” Hanyu said during a pre-parade ceremony, where he received an honorary award from Miyagi Prefecture for the second time.

Hanyu was given the same award in 2014, when about 92,000 people flocked to an event to celebrate his gold medal at the Sochi Olympics.

Hanyu donated ¥5 million ($46,000) each to Miyagi and Sendai to assist reconstruction, as the prefecture and its capital were among the areas hardest hit by the devastating 2011 earthquake and tsunami.

Also on Sunday in the Hokkaido town of Makubetsu, about 18,000 people lined the route of a parade to fete Nana Takagi and her sister Miho, who both won gold as part of the women’s speedskating pursuit team at the Pyeongchang Winter Olympics.

Nana also won the women’s mass-start speedskating race to become the first Japanese woman to win multiple gold medals at the Winter Olympics, while Miho also won silver in the 1,500 meter and bronze in the 1,000 meter races.