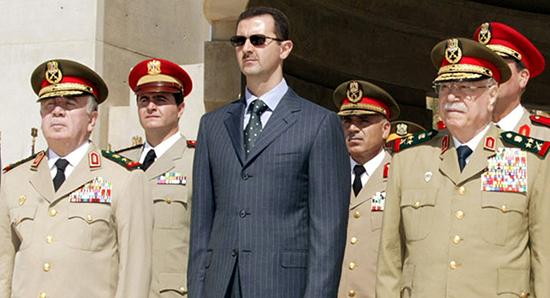 Syrian “rebels” Norway has trained to contribute to the fight against Daesh are now supposed to have turned their weapons against the Syrian government. The rebels’ leader makes no secret of the fact that overthrowing Bashar Assad is the main goal.
The Norwegian-trained Syrian militia called the Revolutionary Command Army (MaT) meant to help quell Daesh* are now waging a war against the Syrian leadership and pro-government forces, the Norwegian daily Klassekampen reported.
According to Klassekampen, the rebel group is now openly fighting for a regime change in Syria, while also being an important part of the US’s efforts to prevent Iranian influence in the region.
In May 2016, it was announced that Norwegian soldiers were to be dispatched to Syria’s neighbor country Jordan to provide “training, counseling and operational support” to Syrian paramilitary groups fighting Daesh as part of the US-led Operation Inherent Resolve. In June 2016, the Norwegian parliament also green-lit similar missions in Syria itself.
While Norway’s Syria contribution was formally concluded in March this year, as the mandate formally expired, the exact extent and nature of Norway’s involvement was largely kept secret. MaT commander Muhannad al-Talla confirmed to Klassekampen that his group was trained by Norwegians in al-Tanf in southeastern Syria, where the US also has a base.
While both Prime Minister Erna Solberg and then-Defense Minister Ine Eriksen Søreide emphasized the mandate was to fight Daesh, ensuring that they “won’t endanger the peace process,” al-Talla claimed that his Western allies never concealed that his soldiers were to fight both terrorists and the Syrian government.
“From the very beginning, I’ve been completely aware that I’m fighting “the Islamic State” and the al-Assad forces. [Daesh] is not gone but is clearly weakened. Now the priority is the fight Assad,” al-Talla admitted to Klassekampen.
The al-Tanf Base is a strategic outpost along the main route between Damascus and Baghdad. There, the US has created a so-called 55-square-kilometer safety zone secured by US soldiers with the help of al-Talla’s units.
Within the zone, Assad-loyal troops have been bombed at least two times by US combat aircraft. At the same time, several rebel groups, including MaT took part in an offensive against government forces after Daesh’s withdrawal from eastern Syria. Insurgent Free Syrian Army (FSA) spokesman and counselor Ibrahim al-Idlibi confirmed to Klassekampen that Norway-trained “militia” took part in the struggle against Assad associated forces, such as the operation “The Country is Ours” carried out in May and June 2017.
While the Syrian government has managed to reclaim most of the country’s territory from Daesh and various rebel groups, MaT leader Muhannad al-Talla is by his own admission not ready to lay down arms.
“It is true that the current balance of power favors Assad. But we will never let him have peace. Even if he wins the war, we will continue to make his life sad for him,” al-Talla pledged.
According to Klassekampen, MaT and other West-supported paramilitary groups are part of a larger superpower game, where the US seeks to ensure control in the border area between Syria and Iran to stop further Iranian influence in the region.
According to FSA spokesman al-Idlibi, the goal of MaT and similar rebel groups is to “fight Iranian and Shia groups” in the area. Al-Idlibi pledged that the fight will continue “until the mission is complete.”
“At the moment, the goal is to control the main road between Damascus and Baghdad. Thus, we prevent land expansion for Iranian forces between Syria and Iraq through the desert,” al-Idlibi pointed out.
Both Muhannad al-Talla and the Norwegian Ministry of Defense denied that Norwegians ever participated in the fight against the Syrian government and its allies. Norway formally ceased its mission in Syria, with the Defense Ministry deciding to focus on Iraq.
* Daesh (also known as IS/ISIS/ISIL) is a terrorist organization banned in Russia