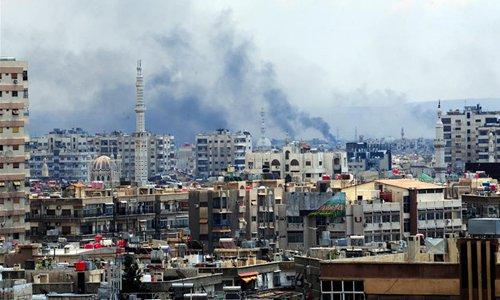 The Syrian army is advancing in the battles against the Islamic State (IS) in southern Damascus, Syrian SANA news agency reported on Sunday.

The infantry units of the Syrian army are advancing in the battle against IS in Hajar al-Aswad area in southern Damascus from several directions, capturing on the outskirts of that area, according to the report.

The Syrian warplanes have intensified airstrikes on IS positions in Hajar al-Aswad since dawn Sunday, in a bid to clear the area, said SANA.

The Syrian Observatory for Human Rights said Sunday that the IS militants refused to leave, fearing to be exposed to the Russian airstrikes when they are out in the open desert.

The IS entered Hajar al-Aswad and nearby areas in 2015 and the military operation started after Syrian army completely secured Eastern Ghouta, with the last rebel batch left their last strongholds in the Douma district a week ago.