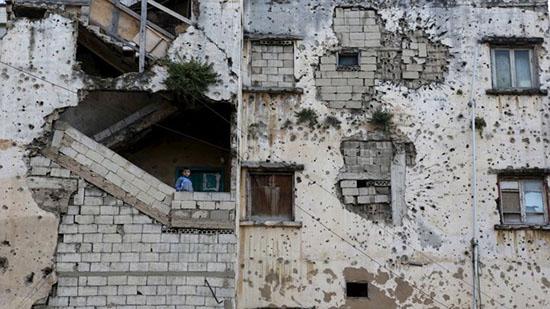 “Everyone knows someone who went missing. But they don’t speak about these things.”

BEIRUT—In a neighborhood in east Beirut, you’ll come across a nondescript parking lot, backed up on one side by an Ottoman-era house and on another by a sleek high-rise, casting its shadow across a mix of old shops and upscale design stores below. It was from inside one of these old shops in the late 1970s—a few years into Lebanon’s long, violent civil war—that Avedis Manoukian, a shop owner, saw the trucks loaded with dead bodies roll up to what is now the parking lot;  back then, it was an empty, dirt-covered patch. “He kept telling us, ‘Today, they came with bulldozers and dumped some more corpses there, covered them with earth. Then they did it again, then they did it again,’” Aline Manoukian, Avedis’s daughter, recalled when we spoke. As a young girl, she would visit her father’s store and look out onto the lot, filled with an unknown number of unidentified bodies. “The story remained with me,” she said. “Every time I pass by, I know there are people there.”

This site is one of well over 100 locations scattered throughout Lebanon believed by researchers to be mass graves, a grim legacy of a 15-year war that pitted Lebanese-Muslim, Lebanese-Christian, Palestinian, and other sectarian militias against one another, leaving between 100,000 and 200,000 people dead and thousands more missing. Since the war’s end in 1990, activists and NGOs have pressured the Lebanese government to mount a serious effort to locate people who went missing, to little avail. The 15-year Syrian occupation that followed the conflict, a brief war with Israel, an influx of refugees from Syria, and protracted economic and political turbulence have helped push the issue to the bottom of the government’s agenda. There’s also little political will to investigate cases of those who went missing during the war: Today’s politicians were yesterday’s militiamen, and few of them seem interested in digging up the past.

With each passing year, preserving evidence that could clear up the fate of the missing—and bring peace to their long-suffering families—becomes harder. Witnesses who have information about detention centers and burial sites, and former fighters, whose memories hold answers the families seek, are growing old. Meanwhile, the burial sites themselves are steadily being destroyed. In Beirut’s intermittent spurts of postwar prosperity, it has sprouted countless towering office buildings and luxury apartments. “Do you know how many mass graves you’re stepping on when you walk through Beirut?” Malena Eichenberg, a researcher at the Lebanese NGO Act for the Disappeared, asked. “Parking lots are mass graves here.”

The government has done little to investigate what happened to those who went missing. In 2000, a government commission released a skimpy three-page report that acknowledged three well-known mass-grave sites. When Syria’s 15-year occupation ended in 2005, a Syrian–Lebanese commission was created to investigate the fate of Lebanese people who disappeared into Syria, but it only fully investigated two cases. So several years ago, a handful of NGOs decided to take up the work they believed the government should be doing: They began documenting every detail that a future government commission would need to determine the fate of missing people.

Since 2015, Eichenberg and her team have worked to locate burial sites throughout Lebanon and plot them on a password-protected digital map. Assembled using information from open sources and hundreds of interviews with families of the missing, witnesses, and former civil-war combatants, the map bursts with colorful pins, each representing a painful memory: a mass grave, a checkpoint, a detention center, an armed confrontation, the last known location of a missing person. As Act for the Disappeared locates burial sites, its researchers rate them on three dimensions: the credibility of the information that led them to the site, the political sensitivity of the mass grave—if found to be connected to a group that’s still in power in Lebanon, it receives high marks for sensitivity—and the risk that the site will be destroyed. Burial sites deemed at high risk of destruction are often located in areas under development. Often, when researchers went to a suspected burial site, they found a luxury condo sitting on top of it, its wealthy inhabitants likely unaware of what lay beneath.

So far, Act for the Disappeared’s secret database has information on nearly 2,200 missing people and 112 mass-grave sites. It’s unclear how many people went missing during the war: The government puts the figure at 17,000, but activists believe that number double or triple counts many of the missing. Eichenberg said a more realistic estimate is around 8,000. Of the burial sites logged in the database, dozens are documented in detail, their locations confirmed by multiple sources, including witnesses and news stories.

With this information, Eichenberg and her colleagues are reconstructing the well-worn paths along which thousands were led from kidnapping to burial. The key nodes on these routes—checkpoints, detention centers, burial sites—are linked together in the database. This can help reveal the fate of other missing people, Eichenberg told me, as she showed me around the complex dataset she and her colleagues have compiled. “If everybody that we know so far was taken from this checkpoint to this detention center, we can infer that [others] are following the same line, and we can expect to find them in the third place,” she said, referring to a potential burial site.

Until now, Act for the Disappeared has not publicized the map’s existence. “We fear that there will be intentional destruction of graves if we release information without proper protection [for the sites],” Eichenberg said. Justine di Mayo, the director of Act for the Disappeared, stressed that this research isn’t ready to be shared with the families of the missing. It’s intended for protecting burial sites and, eventually, for passing along to authorities, she said.

This concern over the burial sites stems from Lebanon’s remarkably abrupt transition from civil war to peacetime. A postwar amnesty law pardoned crimes that took place during the conflict, absolving the leaders of violent militias of responsibility for their actions. But despite being offered legal forgiveness, activists worry that if the map of mass-grave sites became public, former fighters could try to destroy the very evidence the map is intended to protect.

Even today, gathering sensitive information about the civil war is difficult. Many adults, whether they fought in or lived through the conflict, prefer not to talk about it. Children rarely learn about it in school. “Everyone in Lebanon knows someone who went missing. But they don’t speak about these things,” Manoukian said. Describing the mindset of those who avoid speaking about the conflict, she added: “Why open these wounds and say, ‘Look what they did to us, and what we did to them?’ … Everybody has this feeling of guilt. Because we slaughtered each other.” But Manoukian herself, like the activists I spoke with, said that staying silent is more dangerous than dealing with the painful past. “Lebanon will see a new cycle of violence if we don’t address what happened,” di Mayo said.

The data-gathering push has also garnered controversy. Groups like the Committee of the Families of the Kidnapped and Disappeared in Lebanon, which was founded in 1982, preferred to continue pressuring the government to form an investigatory commission rather than do the work for the government. On April 13, the 43rd anniversary of the beginning of the civil war, the Committee launched a new campaign to lobby candidates in Lebanon’s upcoming parliamentary elections—the country’s first in nearly a decade—to support creating a commission. (Various bills that would establish a commission have been stalled in parliament since 2012.)

In the meantime, researchers from Act for the Disappeared, the International Committee of the Red Cross, and other groups continue gathering information. But documentation won’t prevent the destruction of burial sites. The next step, di Mayo said, is to open legal cases to prevent construction on the most at-risk sites. She said there are at least five sites in urgent need of protection, and that she hopes that information gathered by Act for the Disappeared can help families of missing persons—or the Committee of the Families—begin legal proceedings to protect these sites within the next three months. It wouldn’t be the first time this tactic has been used. Three cases filed by the Committee have been stalled in court for years, and it’s unclear whether it is still pursuing them; the Committee declined to comment.

Fueled by frustration, advocates for the disappeared hope to dial up pressure on the government by going public with their research. Eventually, after handing over their meticulously assembled work to the authorities, they hope to become irrelevant. “Like any government who respects itself, [Lebanon’s] should be able to give some answers to these people,” Manoukian said. “They owe them this. They owe their people this.”