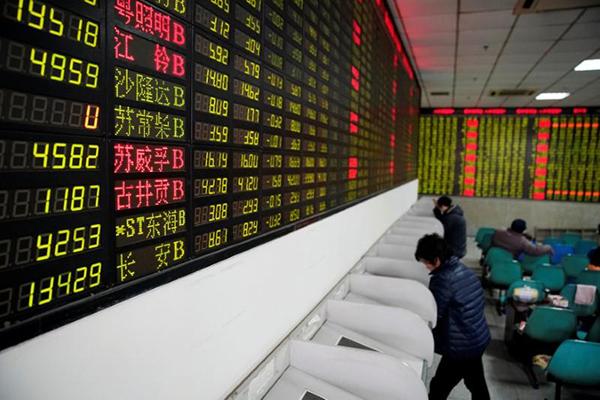 TOKYO/SYDNEY (Reuters) – Asian stocks steadied after hitting two-week lows on Tuesday as investors paused for breathe following a heavy sell-off in recent sessions and waited to see if the dollar’s rally was sustainable.

Spreadbetters pointed to a firm opening in Europe with FTSE futures FFIc1 up 0.2 percent. Wall Street is also seen higher, with E-Minis for the S&P 500 ESc1 gaining 0.3 percent.

MSCI’s broadest index of Asia-Pacific shares outside Japan .MIAPJ0000PUS tacked on 0.1 percent following two straight days of declines that took it to its lowest since April 9.

U.S. bond prices rebounded too, capping four days of losses that sent 10-year Treasury yields closer to the key psychological barrier of 3 percent – a level not seen since early 2014. US10YT=RR

The U.S. dollar, which has risen in the past five sessions against a basket of major currencies, also took a breather to camp near a four-month peak. .DXY

“Investors are now watching closely to see if we are in the eye of the recent storm of volatility or if we do have calm seas ahead leading to stronger global growth,” said Nick Twidale, Sydney-based chief operating officer at Rakuten Securities Australia.

“Only time will tell but certainly the market is keeping a close eye on the news wires and screens for anything that may lead to a return to volatility and downside risk.”

The bond market is bracing for combined sales of $96 billion in coupon-bearing Treasuries this week on greater government borrowing following a massive tax overhaul last year and a two-year budget agreement reached in February.

Inflation worries are also mounting as oil and commodity prices have been rising in recent weeks.

A market gauge of investors’ inflation expectations such as the 5-year forward inflation swap USIL5YF5Y=R and 10-year breakeven yield have hit their highest levels in many months.

These factors have stoked concerns that U.S. inflation, long subdued since the financial crisis a decade ago, could gain momentum as President Donald Trump’s tax cuts this year could stimulate an economy already near or at full employment.

In such a scenario the U.S. Federal Reserve could raise rates more than three times this year in a further blow to equities.

Analysts expect earnings growth at S&P 500 companies of nearly 20 percent in the first quarter, the strongest showing in seven years, according to Thomson Reuters data.

Of around 18 percent of the companies in the S&P 500 that have already reported, 78.2 percent beat consensus estimates.

In currencies, the dollar was a shade firmer at 108.81 yen JPY= after jumping almost 1 percent on Monday to its highest in ten weeks.

The greenback also strengthened against emerging market currencies, hitting three-month highs against the South African rand ZAR=D4 and a 1-1/2-year top against the Brazilian real BRL=.

But market players were not convinced the rally is here to stay.

“While momentum can extend USD gains we still maintain that secular forces acting against the dollar – namely the burgeoning ‘twin deficits’ – will stymie a significant USD recovery.”

The euro held at $1.2213 EUR= after hitting its lowest since March 1 when Trump unveiled tariffs on imported steel and aluminum.

Three-month aluminum on the London Metal Exchange CMAL3 last stood at $2,243 per tonne after the United States extended the deadline for sanctions on Russian aluminum producer Rusal (0486.HK).

The metal had rallied to its highest since mid-2011 last week at $2,718 a tonne on fears of a global shortage as a result of the U.S. sanctions.

Oil prices held near 3-1/2-year peaks supported by production cuts by oil producing countries and wariness about geopolitical risks in the face of Washington’s threat to scupper a nuclear deal with Iran.