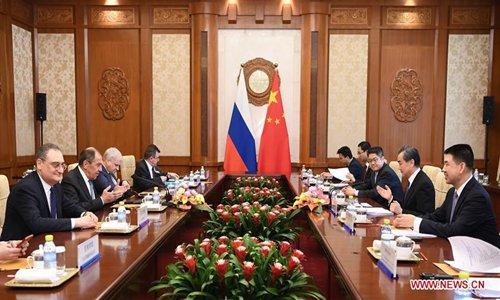 Wang called on both countries to prepare well for the next stage of high-level exchanges in line with the consensus reached by the two presidents, forge ahead with cooperation in various areas, and enhance coordination within multilateral frameworks so as to inject new impetus into China-Russia relations.

China and Russia need to enhance coordination whether it is out of the needs of maintaining their own interests or to safeguard world peace and stability, said Wang.

It is not a temporary means nor it will be affected by external factors that the two countries enhance strategic coordination, he said.

It is a strategic choice rooted in the fundamental interests of both peoples as well as an inevitable historical result that complies with the trend of times and the global trend of peace and development, he said.

Lavrov said it has always been Russia’s priority to develop the Russia-China comprehensive partnership of strategic coordination.

Russia will work with China to make sure that the two presidents have successful meetings and the bilateral ties make new progress, he said.

On the Korean Peninsula issue, Wang said the announcement by the Democratic People’s Republic of Korea (DPRK) that it will stop nuclear tests and intercontinental ballistic missile (ICBM) launches is a very important step towards a political solution to the denuclearization of the peninsula and is conducive to easing regional tensions.

He said China and Russia, sharing similar views on the Korean Peninsula issue, need to further enhance coordination and communication under the new circumstances in order to make their contribution to the political settlement of the issue.

Armenia ratifies International Convention against the Recruitment, Use, Financing and Training of Mercenaries