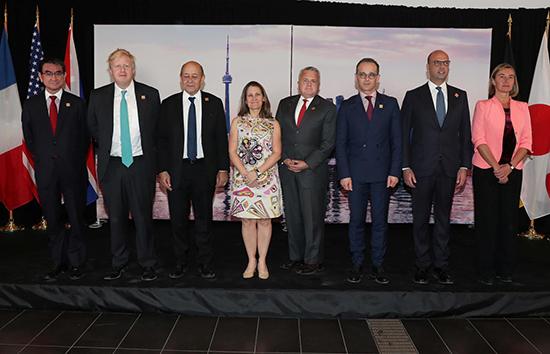 At the same time, there were also suggestions that Pyongyang’s announcement may not have been a complete statement, as it did not mention nuclear abolition, Kono told reporters in Toronto, the venue for the two-day G-7 meeting through Monday.

On the first day of their talks, the ministers from Britain, Canada, France, Germany, Italy, Japan and the United States agreed not to tolerate a nuclear-armed North Korea, according to Kono.

They set a goal for North Korea to abandon all types of weapons of mass destruction, including biological and chemical weapons, as well as missiles of all ranges, in a complete, irreversible and verifiable way and reaffirmed a policy of maintaining maximum pressure on the reclusive state until it achieves denuclearization.

Many participants in the G-7 meeting said the July 2015 nuclear deal signed between Iran and six major countries, including the United States, needs to be maintained, although U.S. President Donald Trump is threatening to quit.

Britain, Germany and France apparently hope to discourage the United States from leaving the pact by showing a positive attitude toward Washington’s request for the European side to implement additional measures, such as restrictions on missile development, that are not included in the deal.

The United States and the European countries aim to show in the G-7 meeting an unyielding, unified position toward Russia with regard to the poisoning of a former Russian spy attacked with a nerve agent in Britain and Moscow’s support for the regime of Syrian President Bashar Assad.

According to Kono, however, the possible imposition of additional sanctions against Russia was not brought up in Sunday’s talks, with some stressing the need for dialogue due to the view that the civil war in Syria cannot be resolved without Russia.Speech