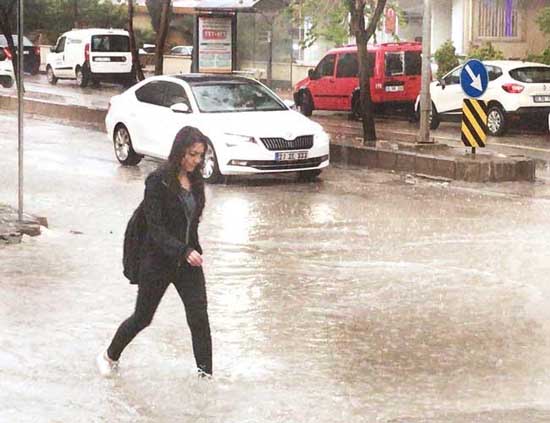 The heavy rains and flooding that have hit Turkey’s southern province of Hatay since April 20 have made their way to the historic Long Bazaar in Turkey’s south.

The bazaar, located in Hatay’s central Antakya district, has been seen with water running down the corridor where shopkeepers sell their goods in a video recorded by locals and seen by Hürriyet Daily News on April 23.

The hardwood floors of the shopping mall located in the heart of the city were damaged after they soaked up water streaming down from the Habib-i Neccar Mountain nearby.

The rain, which fell for about an hour on the night of April 21, also stopped daily life in Antakya.

Traffic was blocked as cars were seen left halfway underwater.

While many cars were damaged in construction sites when buildings collapsed to the ground, shops and residences were also severely hit by floods.

Meanwhile, territorial water and sewage services worked throughout the night to unclog the city.

The Long Bazaar, “Uzun Çarşı” in Turkish, is famous for the local and traditional goods that are sold there. From homeware to clothes, spices to herbs and local dairy products, to jewelry, carpets and antiques, the bazaar is where one can find local goods all under one roof.

Once a stop on the Silk Road, the landmark bazaar is also a place where locals live daily life.

In November 2017, state-run Anadolu Agency had reported restoration plans for the bazaar were underway.