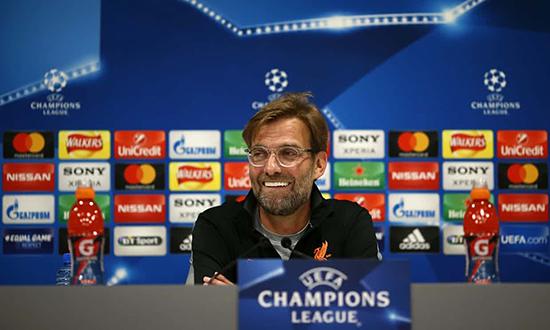 Jürgen Klopp has filmed a message urging Liverpool fans to receive Roma as guests and show “our very best to the world” when an old rivalry is renewed in the Champions League semi-final. Liverpool council is showing its hospitable side too, posting “Benvenuti a Liverpool” signs in Roma colours around the city and hiring a ukulele band to serenade the 1,000 Italians expected through John Lennon Airport on Tuesday morning.

A concerted effort is being made to change the European experience outside Anfield following the Manchester City bus incident. Inside, however, Liverpool want more of the same from fans and players alike.

The billing as well as the build‑up to this semi-final has altered for Liverpool since City were vanquished in the last eight. Klopp’s team thrived on the ferocity of Anfield and the opportunity to shatter City’s mantle as favourites. Not that anyone associated with Anfield held Pep Guardiola’s team in that regard although now, following Liverpool’s 5-1 aggregate triumph, the greater expectation rests on the unbeaten highest‑scoring team in the Champions League this season.

Roma’s reward for an astonishing comeback against Barcelona is a second European Cup semi‑final in their history, their first since beating Dundee United en route to losing against Liverpool in the final at Stadio Olimpico 34 years ago. It is a defeat that still burns.

Liverpool are in their 10th semi-final seeking an eighth European Cup final appearance. History does count, even though none of this Liverpool team were born when Roma were beaten in 1984, but Klopp and his players would prefer to be free of the pressure that expectation brings.

Jordan Henderson said: “I don’t think we are under extra pressure because I still see us going into this game as the underdog with them beating Barcelona, who were probably favourites before the last round.”

The captain was reminded of Liverpool’s 5-1 defeat of a City team labelled by Klopp as the best in Europe before the quarter-finals. “Yes, but that’s just us doing what we are capable of doing,” Henderson responded. “We need to keep doing that again and again and again.

“This is a huge challenge, a huge test. Roma are a fantastic side with fantastic players as they have shown throughout the Champions League this season. We have got to keep improving because we need the perfect performance if we are going to get the right result.”

Klopp also believes his team’s performance, and the Anfield atmosphere, must step up a level to overcome Eusebio Di Francesco’s men.

The Liverpool manager, who will be taking charge of his 150th game with the club on Tuesday, said: “Most people in the football world thought the last four would be Bayern, Barcelona, Real Madrid and City. Barcelona are not here because of Rome and City are not here because of us. We both deserve to be here. Maybe a lot of people think the real final should be Real Madrid v Bayern Munich but that will not happen because they are in the other semi, so one of us will go through.

“That is a big chance for both of us but a big job to do. We are both in a good moment. Anyone who watched Roma in the last few weeks can see they are flying with different lineups. They made seven or eight changes in the last game and still won comfortably.

“We really feel the opportunity. It is a big thing. We came here with not a lot of expectation. We only came here expecting to win the games. People ask me if I feel pressure. No. I only feel opportunity. I am really happy to be here and to have another big night at Anfield.”

Klopp had not congratulated Mohamed Salah on his PFA Player of the Year award in person before the manager met the media at Anfield on Monday. He did have a word of advice for the Egypt international signed for £36.9m from Roma last summer – a player with 41 goals so far this season, 14 in his past nine games at Anfield. Both clubs know so much depends on the forward in this semi-final.

“Italian defenders are famous for not having friendly games,” Klopp said. “So I think Mo will feel very early in the game that they are not his team‑mates any more. Then he can strike back in a football way.”

Henderson, who voted for Kevin De Bruyne in the PFA award (players are not allowed to vote for their team‑mates), is acutely aware of the part Rome plays in Liverpool’s history. For all the underdog talk, the captain is also supremely confident of his team’s ability to create another memorable chapter.

“We definitely take inspiration from Liverpool’s history,” Henderson said. “But our focus is to create our own and for people to be looking back at this team in 20 or 30 years’ time and saying how good we were, how special this year was or the next few years will be. I feel this is just the start of something special.

“This is what you play football for, huge games like this against top European sides. As a footballer, these are the moments that you dream about playing in. Everything that has gone before it, every struggle and every test, will put you in good stead for a game like this.”