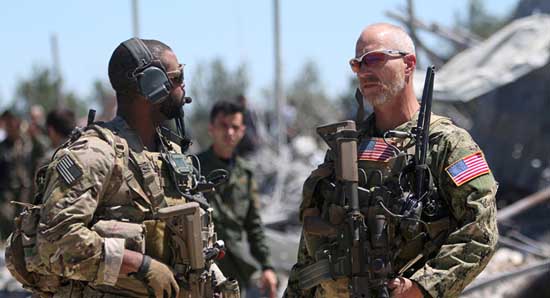 Despite Donald Trump’s claims, the US is actively digging in the area of the Eastern bank of the Euphrates River in Syria and has no intention of leaving, Russian foreign minister Sergei Lavrov said Tuesday.

“As for economic reconstruction, this will take time and I am convinced that we should all act in the interests of the Syrian people and out of total respect for the sovereignty and territorial integrity of Syria,” he said, talking about the rebuilding of Syria.

Lavrov underscored that he said this because “a whole host of nations are deliberately aiming to disintegrate Syria.”

“The US pledged that their only aim was to repel terrorists from Syria, to defeat the so-called ‘Islamic State,’ but, despite all their claims, despite President Trump’s claims, the US is actually positioning itself on the Eastern bank of the Euphrates and have no intention of leaving,” Lavrov said.

The statement of the Russian senior official comes less than a month after US President Donald Trump made a surprising remark about withdrawing from Syria, appearing to contradict previous comments by his administration, including senior Pentagon and State Department officials, saying that American troops would maintain an open-ended presence in Syria.

Since 2014 Washington has been leading a coalition of allies fighting against Daesh* without either a UN mandate or the Syrian government’s authorization. Damascus has consistently called the US military presence in the country “illegal.”

The Russian foreign minister said earlier in the year that the US had seemed to establish a quasi-state on the Eastern bank of the Euphrates River.

*Daesh, also known as ISIL/ISIS/IS, a terrorist group banned in Russia and many other countries