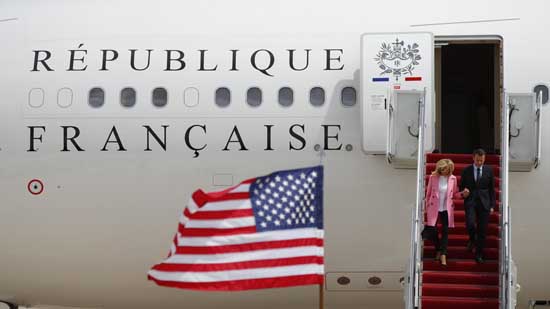 As Emmanuel Macron arrives in Washington, the French President is expected to face pressure to tackle Trump on Iran, trade, and climate change, all while continuing to strengthen his cosy relationship with the US president.

Macron and his wife will join Donald and Melania Trump for a private dinner on Monday, followed by talks and a state dinner on Tuesday. On Wednesday, Macron will address a joint session of Congress, 58 years to the day after General Charles de Gaulle spoke on Capitol Hill in 1960.

Macron told Fox News on Sunday that himself and Trump “have a very special relationship.” Macron has been more successful than his fellow European leaders in building a relationship with Trump, taking the US President to a grandiose military parade in Paris and dining with him atop the Eiffel tower when he visited Paris last year.

In discussions with Trump, Macron is likely to walk a line between sycophancy and criticism. He is expected to pressure Trump into remaining in the Iran deal, signed between Iran and a bloc made up of the US, China, Russia, UK, France and Germany in 2015. Trump has said that the deal, which limits Iran’s nuclear program in exchange for sanctions relief, is overly lenient and “was one of the worst and most one-sided transactions the United States has ever entered into.”

For his part, in his interview on Sunday, Macron said that, while he thinks the Iran deal is not perfect, he sees no better option. “Let’s preserve this framework,” he said, “because it’s better than the sort of North Korean type of situation.”

The French president will likely also be asking Trump for concessions for Europe on trade tariffs. “I hope he will not implement these new tariffs and he will decide for an exemption for the European Union,” he said on Fox. “You cannot make a trade war with your ally.”

Macron met with German Chancellor Angela Merkel in Berlin last week to discuss their twin-pronged efforts to dissuade Trump from unilateral trade decisions. Merkel travels to Washington later in the week, where she may find it more difficult to establish a rapport with Trump. Macron and Trump reportedly speak often by phone, whereas Merkel did not speak to Trump for over five months until this March. Trump has repeatedly criticized Germany for failing to meet NATO’s required spend of 2 percent of GDP on defense, and has slammed Merkel for her ‘open-door’ migration policy that saw over a million refugees and migrants flood Germany in recent years.

Macron’s cosying up to Trump is a gamble for the ambitious French leader. Lending French support to the US airstrikes on Syria two weeks ago will strengthen the already warm relationship between the two presidents and could make Trump more amenable to discussion, but may alienate French voters. The Syria strikes were criticized by both the left and right in France, who remain proud of Jacques Chirac’s decision to stay out of the Iraq war in 2003. In lending military support to an American foreign escapade, Macron risks being seen as ‘France’s Tony Blair.’

Macron’s declaration of support for Kurdish militias in Syria –who are allies of the US– has already been described by analysts as a “bow to the US” and has been criticized by the Turkish government, who have been fighting a low-intensity military campaign against the Kurds for three decades.

Furthermore, Macron’s own approval rating at home has fallen to 40 percent, the lowest since his election last year. With France rocked by strikes and demonstrations by rail workers, students, pensioners and more, the French electorate may very well look at Macron’s Washington trip with indifference.

Regardless of whether Macron tests the limits of his bond with Trump, and regardless of whether anything of substance comes from the two leaders’ discussions, the chance to be seen on the world stage might count as some sort of win for the French president, whose public displays of grandeur at the Versailles palace have been described by the French left as “Pharaonic” and “monarchical.”

Macron may be a self-described ‘radical centrist’, but he has referred to his own style of rule as “Jupiterian” – a reference to the Roman king of the gods, who rained thunder and lightning from the sky. For Macron it meant becoming a leader who rules from above with cold resolve, reveals little to the media, and speaks seldom and deliberately to the public.

Macron has said that France is still reeling from the effects of the French revolution, and that there is a void at the core of the democratic process. “In French politics, this absence is the presence of a King, a King whom, fundamentally, I don’t think the French people wanted dead,” he told journalist Eric Fottorino in his book Macron Par Macron (Macron By Macron).

This week’s lavish state dinners and talks with the leader of the free world could give Macron the chance to appear lofty and king-like, whatever the outcome.