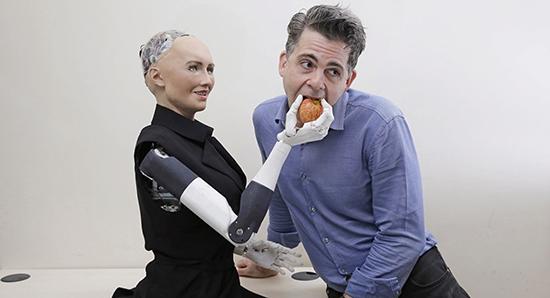 The phrase “I do” will stop applying to humans only in the coming years, as leading roboticist Dr. David Hanson has made an eerie prediction in a new research paper about the future of androids.

According to the man who created a human-like android called Sophia, robots will receive the same civil rights as humans by the year 2045, The Sun reported.

These rights may include the “right to marry, own land and vote in general elections.” So sex robots could soon become someone’s wife or husband.

​Dr. Hanson said that he foresees a future in which robots will surpass nearly everything that humans can do by 2035.

​By 2038, the machines will rise up and start what Hanson calls the “Global Robotic Civil Rights Movement.”

“As people’s demands for more generally intelligent machines push the complexity of AI forward, there will come a tipping point where robots will awaken and insist on their rights to exist, to live free,” Hanson was reported as saying by the publication.

The robot’s skin is made of a malleable material called Frubber, which looks very much like human skin. It has multiple motors hidden beneath its surface, allowing for realistic facial expressions such as frowns, smiles and the ability to express various other types of emotions.

The android has cameras for eyes and a computer algorithm that allows it to recognize faces and make eye contact.

​Sophia can hear human speech and answer questions, as well as remember interactions and faces. The machine uses these memories to advance learning and utility. Sophia received Saudi Arabian residency last year. Recently Sophia appeared on behalf of her creator at a university RISD for the commencement address.