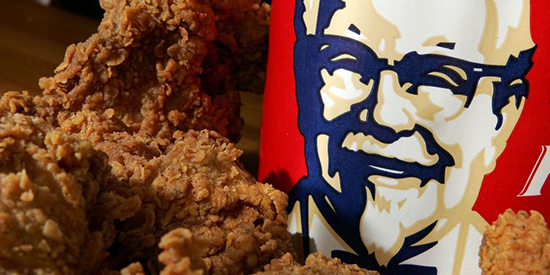 Don’t worry, the signature blend of herbs and spices will still be there.

KFC is removing one of its essential ingredients—chicken—from its classic recipe this summer to test out “chicken-like vegetarian options,” in the UK The New York Times reports. But don’t worry: while the chicken will be gone, the signature blend of herbs and spices will still be there.

“Development of the recipe is still in its very early stages, and so the options we’re exploring in our kitchen are still top secret,” a spokesman for KFC told The New York Times. “Once we’ve perfected the recipe, we aim to test with customers this year, and if all goes well, we hope to launch a new vegetarian option in 2019.”

For now, it looks like this vegetarian option will only launch in the UK since the spokesman declined to comment on whether KFC had plans to roll it out globally.

People on Twitter were quick to react to the faux fried chicken announcement. One user called it an “ABOMINATION,” while another said, “Colonel Sanders is turning his grave.”

Vegetarians chimed in to say that they wouldn’t eat at KFC even if the new menu item was meatless.

don’t bother. no self-respecting vegetarian would eat at KFC.

KFC is the most unhealthiest restaurant. I would not even buy a vegetarian option there if they had it. Would rather go to McCafe and I probably only go there once every 6 months.

Others were a little more enthusiastic about the news and begged KFC to bring the chicken-less KFC to the U.S.

@kfc I hear you are pursuing a vegetarian option in the UK!
Please bring it to the USA!

KFC’s vegetarian “fried chicken” comes on the heels of McDonald’s adding a vegan burger—called the McVegan—to its permanent menu in Sweden and Finland last December after testing proved successful in those markets.