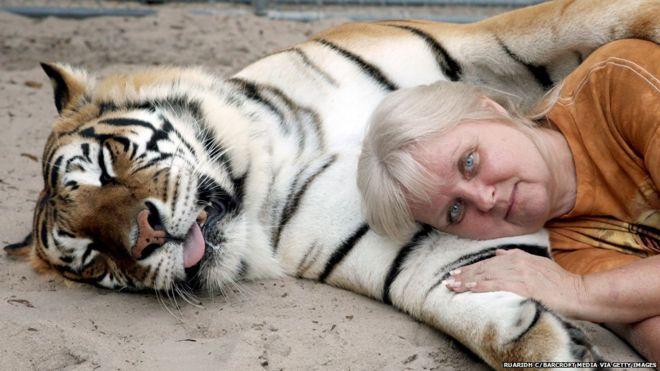 There may be more captive tigers in the US than wild ones in the rest of the world. But in states like Texas that bristle at government interference, no-one really knows how many are being kept as pets.

Taj was a four-month-old tiger cub when purchased at a Texas truck stop by the driver of an 18-wheeler lorry. But after Taj began tearing up the truck’s cab, the driver contacted Austin Zoo to get the animals off his hands. The zoo now looks after the fully grown 17-year-old Bengal tiger male.

Taj is one of as many as 7,000 tigers living in the US either in zoos or privately owned, according to some estimates. That’s nearly double the estimated 3,890 tigers still prowling in the wild around the world.

Many of America’s tigers could be in people’s backyards as pets, and often aren’t registered, especially in states like Texas. No-one really knows just how many tigers there are out there.

At the heart of this surprising tiger turnout is the very American notion of a God-given right to do one’s own thing, including owning a pet – no matter how exotic – being an individual liberty that the state should not mess with.

“A man came up to me and called me a communist,” Ben Callison, a former animal sanctuary director and animal welfare activist, describes the reaction after he addressed a US Agricultural Department conference on the problems with exotic pets. “People say you are trying to take away their rights to own what they want, and do what they want.”

Others, however, want to see more state involvement due to public safety concerns. Many of America’s exotic pets are not covered by the 1973 Endangered Species Act, which only applies to animals taken from the wild. Many of the tigers originate from breeders within America.

“The vast majority of tigers in the US come from the irresponsible captive breeding to supply the cub petting industry,” says Callison. “Tigers are smuggled in, but this is mostly a US-born issue.”

So the regulatory burden falls on individual states, and while regulations have increased – even in Texas – too often they prove ineffective, observers say.

“People want something unique, they look for the exotic – there’s a whole host of large carnivorous pets across the country: black bears are common, people have African lions, mountain lions; and then there are the reptiles, alligators, crocodiles, constrictor snakes,” says Nicole Paquette, vice-president of wildlife protection at the Humane Society of the United States (HSUS).

It is easier to own a tiger than a dog that has been labelled dangerous in the state of Texas, which could have between 2,000 and 5,000 tigers.

“Texas is a conservative state and values personal liberties and the right to keep what you want,” says Pamela Boich of the Texas Human Legislation Network, an animal welfare lobbying group.

“There’s sense to that, but if it’s at the price of animal welfare, that is wrong. You can buy a tiger online, it’s just crazy.”

In 2001, Texas passed a law requiring owners of exotic pets to register them, after a tiger ripped off the arm of a young boy. But enforcement is left to the state’s 254 counties, making it difficult to track unregistered tigers.

“Texas is a home rule state, which means it gives a lot of authority to local jurisdictions,” says Chris Van Deusen, spokesman for the Texas Department of State Health Services, noting that only about 50 tigers are currently recorded.

This lack of oversight raises concerns about animals escaping, especially from a combination of the powerful hurricanes and storms that rake the region and often shoddy enclosures.

“There’s no enforcement of standards for enclosures,” Boich says.

When a tiger was found wandering the streets of Houston in 2016, it turned out the female tiger had been evacuated from a nearby rescue farm because of intense flooding. But the person who had been given the tiger for safekeeping was not adequately prepared – and it escaped.

Floods and hurricanes notwithstanding, Texas’s climate is usually very amenable for tigers, meaning they can live outside year round, without the need for winter quarters, says John Gramieri, general curator at Austin Zoo.

“You’re not going to have a tiger in Brooklyn as easily – Texas lends itself to keeping these animals,” Mr Gramieri says.

Texas is also well-positioned for the cross-border trade in tigers with Mexico. Exotic animal seizures at the border used to be mostly birds and reptiles coming from Mexico, but the trade has reversed with mostly tigers and cats bred in the US being smuggled into Mexico.

Most estimates of America’s tiger numbers stem from a 2005 study by Brian Werner of the Tiger Missing Link Foundation, which estimated America had just under 5,000 tigers in zoos, sanctuaries and individual ownership.

The Feline Conservation Federation did its first big cat census in 2011, and in 2016 completed a five-year follow-up to establish population trends.

Why the decline? According to the Feline Conservation Federation, the dropping figures reflect an overall ageing population “as well as many facilities discontinuing the keeping of big cats”.

“My personal theory is that younger generations are more informed on the issues and will not patronise places that keep or breed them. Animal welfare groups are also working to get custody of the animals as they hear of them.”

One of the major concerns is tigers kept at roadside zoos, which often aren’t accredited or noted by surveys.

“We call these substandard zoos, and there are thousands of them all over the country,” Paquette says. “Not all have tigers, but many do.”

In addition, the likes of state fairs, pay-to-play facilities and even shopping malls drive demand for tigers nationally.

“Often they are kept on a bottle too long to keep them artificially small, and malnourished so they can be more easily handled; then they are either sold off, used for breeding or euthanised unless a sanctuary steps in – it’s a vicious cycle.”

One school in Florida even had a caged tiger as star attraction at its senior prom party, it was widely reported last month.

But captive tigers often have diseases and other traumas, including the wrong diet and lack of nutrients.

It would cost about $200 a week in meat to adequately feed your 400-pound pet tiger, and declawing them involves the amputation of each toe bone.

Some develop serious muscular atrophy from spending a life in small enclosures with no room to roam.

“In the wild a tiger’s territory can be 20 square miles or more,” Callison says. “If they spend their entire captive lives in a space equivalent to that of a bedroom the physical and psychological damage is extensive.”

Since 1990, more than 22 people have died and nearly 500 have been injured by captive big cats and primates nationwide, according to the HSUS.

America already has a sizeable population of indigenous wild animals. It’s estimated there are 300,000 black bears, along with 30,000 mountain lions (also known as cougars), and 1,500 grizzly bears.

But statistics indicate that attacks by wild animals are exceedingly rare. A 2017 report by Stanford University concluded that between 2008 and 2015, of the 1,610 animal-related fatalities in the US, the largest proportion were due to the likes of cattle and horses, followed by venomous animals and dogs.

“A mother bear with her cubs can be a dangerous situation if she feels they are threatened, but if you take proper precautions that’s exceedingly unlikely to happen,” Callison says.

“It’s horses and farm animals that cause more deaths because of the sheer quantities and close proximity of humans working with them.”

Those lobbying for more regulations ultimately want a federal ban on the breeding of and new ownership of dangerous animals, though they say it’s a hard sell due to people’s distrust of big government.

Even if such legislation passed, and law enforcement and other agencies worked out a strategy to capture illegally-owned tigers, that still leaves the question of what to do with them. Zoos and animal sanctuaries say they already have more tigers than they can take.

In the meantime, changing public attitudes may well be more effective, those with animal welfare organisations say.

“People think if they raise an animal from it being a baby then it won’t be aggressive, but these animals are still wild, it’s in their DNA,” Culver says.

“The animal might not mean to hurt you, but they are so much stronger- it might want to play and will just rake your arm. Even bobcats pack a punch, let me tell you.”