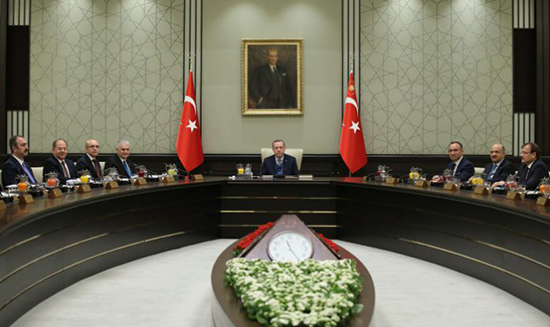 The ruling Justice and Development Party (AKP) government has escalated counterterrorism operations in northern Iraq’s Qandil Mountains and Sinjar region, which both host camps of the outlawed Kurdistan Workers’ Party (PKK), as the June 24 presidential and parliamentary elections in Turkey approach.

President Recep Tayyip Erdoğan on Monday announced during a rally in Niğde province that the operation has been launched and that 20 Turkish jets hit 14 key targets in Qandil and Sinjar.

“After June 24, if need be, first me, then you [will join to the military operation],” Erdoğan responded to the crowd when they chanted “Chief! Send us to Qandil!”

“Even if the opposition doesn’t want to, we will drain the swamp of terror in Qandil.”

Erdoğan also recalled the Syrian cities that the Turkish army captured along with the Free Syrian Army (FSA), including Afrin, Jarabulus, al Bab and Azaz.

Foreign Minister Mevlüt Çavuşoğlu also weighed in on the discussion during a meeting in Antalya, saying they would flatten the Qandil Mountains.

“You’ve seen how we entered their caves in Afrin, Jarabulus and al-Bab. Now it’s Qandil’s turn. We will bury them in their caves. We will destroy whatever place poses a threat,” Çavuşoğlu said.

Interior Minister Süleyman Soylu, during a TV interview on Monday, accused the Peoples’ Democratic Party (HDP) of handing over its authority to the PKK after the party exceeded the 10 percent election threshold for the first time in the June 7, 2015 parliamentary elections.

After the election, peace talks between the AKP and the PKK collapsed and the Turkish people experienced the deadliest terror attacks the country’s history.

Also in that election, the AKP lost its majority in parliament for the first time since 2002, and eventually a repeat election was held on Nov. 1, 2015 through which the AKP regained the majority.

Government officials blamed the HDP and the PKK for the interruption of the peace negotiations, while the opposition pointed to the AKP and Erdoğan for stopping the talks in order to use the fear of terrorist attacks during election campaigns.

“When we enter the last week [of election campaigns], I say you should add a ‘before Qandil’ and ‘after Qandil’ parameter [to the election forecasts],” Abdülkadir Selvi, a pro-government columnist, wrote in the Hürriyet daily on Monday.