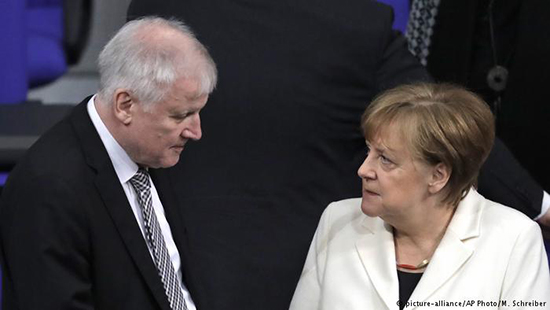 Interior Minister Horst Seehofer’s new “migration master plan” for Germany was set to be published on Tuesday. At the last moment, apparently amid disagreement with Chancellor Angela Merkel, it has been postponed.

Germany’s conservatives have announced a delay to their new “migration master plan.” The precise reason for the delay was not clear, with the Interior Ministry merely saying late Monday that some issues still needed to be agreed.

Interior Minister Horst Seehofer, from Bavaria’s CSU party, was expected to present a 63-point plan on migration and asylum rules on Tuesday to other parties, but seemingly couldn’t get the green light from Chancellor Angela Merkel.

According to a report in Germany’s mass-circulation daily Bild, the pair disagreed over whether or not to send people away at Germany’s border if they had already been refused asylum, or had applied for asylum, elsewhere in the EU.

“I have a responsibility for this country, namely to steer and maintain order. And I can not postpone it until hell freezes over,” Seehofer said.

Reacting to the dispute between the conservatives, the Social Democrats (SPD) — the third constituent in the ruling coalition — said they were coming up with their own plan to deal with migration and asylum procedures.

“Those who want concrete proposals on asylum cannot rely on Seehofer and the CSU (Christian Social Union). That’s why the SPD is now developing its own migration concept,” said deputy SPD party leader Ralf Stegner.

Seehofer has been critical of Merkel’s refugee and immigration policies that have allowed over 1 million asylum seekers into the country since 2015. Merkel’s liberal policies were largely blamed for the poor show by the conservatives in last year’s general election, and the resulting rise of the far-right Alternative for Germany (AfD).

Now, after taking control of the Interior Ministry, Seehofer is making efforts to push the government to the right and regain the ground lost to the AfD.

His CSU party is facing a stiff challenge from the AfD in a regional election in Bavaria in October.

Germany’s existing asylum and migration procedures are back in the spotlight after the rape and murder of a 14-year old German girl, allegedly by an Iraqi refugee, in Wiesbaden last month.