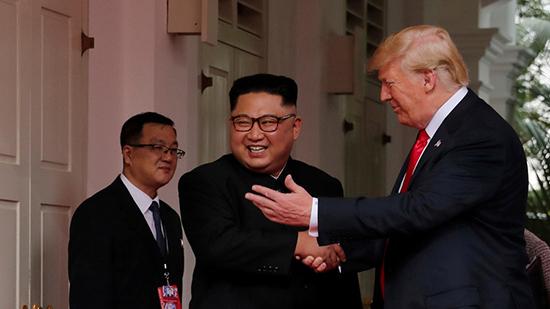 Trump and Kim can both consider the summit a great success. North Korea will abandon its nuclear program for security guarantees. But a real relaxation of tensions takes time and above all trust, says Alexander Freund.

Who would have thought it possible? North Korea will abandon its nuclear program in exchange for comprehensive security guarantees — it wants to look ahead and achieve a fundamental change in relations. That sounds very promising and a great sense of relief is spreading — and rightly so. A few months ago, it looked as though this endlessly simmering conflict could escalate when US President Donald Trump, after mutual insults and North Korean leader Kim Jong Un’s deliberate provocations, threatened to destroy North Korea blatantly before the United Nations. Now these two leaders, of all people, shook hands confidently and looking for a peace agreement.

Trump was able to present himself — especially in his own country — as a great foreign diplomat who finally brought peace to an almost insolvable conflict. Trump has smashed so much diplomatic porcelain in recent weeks that he also needed to land a success in foreign policy for his base in the US. Somehow, it is already an irony of history that the much-scolded Trump brought movement to this ancient conflict in his blustering way and is poised to become the American president who could finalize a peace agreement with North Korea in the near future. Neither the Democrats Bill Clinton and Barack Obama, nor the Republicans George Bush Senior and George Bush Junior have been able to achieve as much on this front, that one must give credit to this unpredictable president. At the same time, of course, any Democrat president would have been torn apart as traitors by conservatives at home.

Victories for Trump and Kim

But Kim can also feel like a winner: For the third generation Kim offspring, this agreement is a huge success. First he bombed his way to the negotiating table and then he actually met a US president at eye level. His regime should not end like that of Saddam Hussein or Moammar Gaddafi, and so he risks being deterred. At the same time, Kim very skillfully secured the support of China and Russia. These two protective powers were invisibly present at the Singapore summit, as was Japan, which does not want to lose its influence in the region to the US.

An important first step has been taken, but trust takes time and, as is well known, the devil is in the details of such agreements — as demonstrated by the laboriously negotiated Iran nuclear deal that Trump overturned. But if the Korean Peninsula finds peace in the mid-term, the question of how the US intends to position itself in Asia in the future will certainly become louder.

Economically, the US can no longer oppose future superpower China as much; the economic ties and dependencies between China and its Asian neighbors are too close. In terms of security policy, however, the US continues to see itself as a peacekeeping power that must put China, which is becoming increasingly self-confident, in its place.

At the Singapore Summit, Trump was once again able to highlight the central role of US as a world power on a large stage. When US warships patrol through the still-open sea routes in Asia or show up in friendly ports, the message is always the same: We oppose rivals like China and we stand by our partners. But doubts are growing as to whether the US would, indeed, send young soldiers into battle as it did in the Korean War to fight for freedom and democracy on the other side of the world and possibly die as well. With its “America First” maxim, punitive tariffs and numerous breaches of contract, Trump has not necessarily built-up trust in Asia either. And so, in addition to all the symbolic politics, the historic Singapore Summit once again marks the beginning of the end of the United States as the world’s policeman and a reliable peacekeeping power.