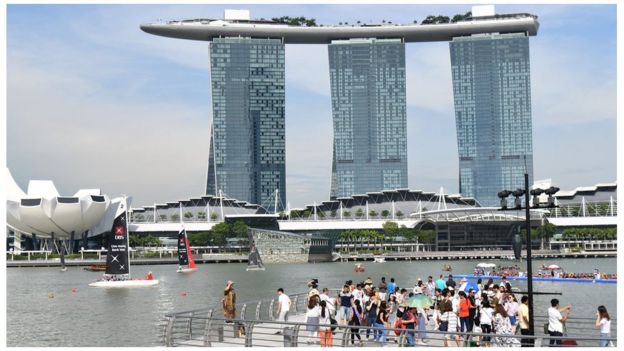 The much anticipated summit of the century between the US and North Korea has arrived – and Singapore is playing host. The world’s media is here, hotels are booked out, security is on high alert and both leaders have brought big delegations. So what will it cost?

Sun, sand and the sea – it is why most tourists come to Singapore’s resort island of Sentosa.

The small enclave, off the coast of the mainland is also known as the island of peace and tranquility in the local language. But on Tuesday Sentosa plays host to what’s being called the greatest show on earth – featuring arguably two of the most volatile leaders on the planet – United States President Donald Trump and North Korean leader Kim Jong Un.

Whether or not the two leaders come to any sort of agreement aside, it is clear that this summit is going to cost a fortune.

The damage for Singapore? $20 million Singapore dollars ($15m; £11m), according to the government.

Let’s start by taking a look at the hotels that are involved.

The five star Capella resort is where the summit is being held. It has more than 100 rooms, and the entire hotel has been booked for the summit. And it’s not cheap – the most basic room can set you back almost £400 a night.

Hundreds of hotel rooms have been booked for the actual event.

The iconic Shangri La hotel is where President Trump and the American delegation are staying.

And just down the road, at the St Regis is where Kim Jong-un will be – no less glamorous.

On average a night at these hotels is around £300 – just imagine the total bill.

If the Chinese and the South Koreans come too, they are rumoured to be staying at the Fullerton – and again, will bring sizeable contingents with them which means more hotel rooms.

At least 2,500 journalists from around the world are descending on the small island of Singapore for this summit. Singapore has built a media centre for the event from scratch, at the site where the city usually hosts the annual Formula One races. They have built a stage, set up 2000 workstations, and are bringing in satellite trucks and cable networks for the event.

“We will be filing for all of our platforms,” Susan Harmon, CBS’s senior producer told me. “It will be very busy for us.”

A large part of the total summit bill will be to cover hefty costs related to securing some of Singapore’s main tourist areas – a serious logistical challenge.

“The government is coughing up for the bill for the security, and it is very high level security,” said Song Seng Wun, economist with CIMB Private Banking. “We are talking about planes up in the sky, people on the streets, in the water, everywhere – so it is 24-7 as far as providing security.”

Mr Wun points out though every additional visitor that comes to Singapore, spends about $500 over three days – so the economic benefits to Singapore are well worth the costs.

Daniel Kim has been living in Singapore for at least a decade. I met him one evening, while he and his friends put up posters and banners for the upcoming summit.

They are hoping that it will bring hope for their homeland.

“Wow, I am so excited, we are hoping that it will go well,” he told me. “But no one knows what’s going to happen next week. We hope for the best, but we don’t know.”

Which is why for many here, the high costs of hosting the event may well be worth a shot at peace.