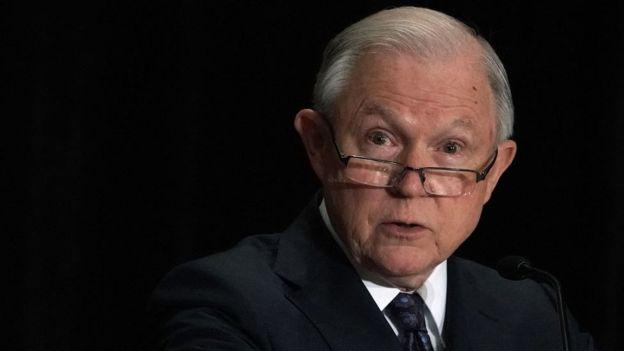 US Attorney General Jeff Sessions has delivered a ruling that curbs immigration judges from considering domestic and gang violence as grounds for asylum. The decision is expected to affect tens of thousands of cases.

US Attorney General Jeff Sessions has said immigration judges generally cannot consider domestic and gang violence as grounds for asylum. Monday’s ruling could affect large numbers of Central Americans who have increasingly turned to the United States for protection.
“Generally, claims by aliens pertaining to domestic violence or gang violence perpetrated by non-government actors will not qualify for asylum,” Sessions wrote in 31-page decision. “The mere fact that a country may have problems effectively policing certain crimes — such as domestic violence or gang violence — or that certain populations are more likely to be victims of crime, cannot itself establish an asylum claim.”

The move, which was widely expected, overruled a Board of Immigration Appeals decision in 2016 that gave asylum status to a woman from El Salvador who had fled her husband.

Sessions reopened the case for review in March as the Trump administration stepped up criticism of asylum practices. He took aim at one of five categories to qualify for asylum: persecution for membership in a social group — calling it “inherently ambiguous.” The other categories are for religion, political affiliation, race and nationality.

The decision narrows who can qualify for asylum when they become victims of private criminal activity, such as gang and domestic violence, as opposed to government persecution.

Domestic violence is a “particularly difficult crime to prevent and prosecute, even in the United States,” Sessions wrote. However, its prevalence in El Salvador doesn’t mean that its government was unwilling or unable to protect victims any less so than the United States.

“No country provides its citizens with complete security from private criminal activity, and perfect protection is not required,” he wrote.

The US government did not say how many asylum claims are for domestic or gang violence. Their advocates, however, said there could be tens of thousands of domestic violence cases in the current immigration court backlog.

Karen Musalo, a professor at University of California Hastings College of Law in San Francisco and a co-counsel for the Salvadoran woman, said the decision could undermine claims of women suffering violence throughout the world, including sex trafficking.

“This is not just about domestic violence, or El Salvador, or gangs,” she said. “This is the attorney general trying to yank us back to the dark ages of rights for women.”

Sessions sent the case back to an immigration judge, whose ruling can be appealed to the Justice Department’s Board of Immigration Appeals and then to a federal appeals court, Musalo said. She anticipates other cases in the pipeline may reach the appeals court first.

“For reasons understood only by himself, the attorney general today erased an important legal development that was universally agreed to be correct,” they wrote. “Today we are deeply disappointed that our country will no longer offer legal protection to women seeking refuge from terrible forms of domestic violence from which their home countries are unable or unwilling to protect them.”

Denise Bell, a researcher for refugee and migrant rights at Amnesty International USA, issued a statement condemning the move.

“In what world does the United States turn its back on people who have suffered persecution, trauma and extreme distress from domestic or gang violence? Families seeking safety deserve our compassion. Instead, Attorney General Sessions is slamming the door on those trying to rebuild their lives.

Sessions’ decision came hours after his latest criticism of the asylum system which he and other administration officials consider rife with abuse. Cases can take years to resolve in backlogged immigration courts that Sessions oversees, and applicants often are released on bond in the meantime.

One administration official said last month that the backlog of asylum cases topped 300,000, nearly half the total backlog.