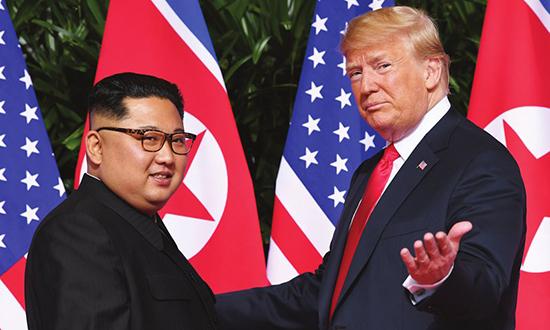 US President Donald Trump held a press conference after his meeting with North Korean leader Kim Jong-un Tuesday afternoon, in which more information was revealed. Trump expressed his satisfaction with the results of the summit, saying Kim would “be remembered as the leader who ushered in a glorious new era of security and prosperity for his people.” He also added that he was confident North Korea would implement the agreement reached by the two sides and disclosed he and Kim have invited each other to visit their own country.

Trump said Kim assured destruction of a “major missile engine testing site” not included in the document signed during their summit. He vowed to “stop the war games,” which was widely interpreted as a hint to stop the joint military exercises with South Korea, one of the major demands by Pyongyang. He also said he hoped to bring US soldiers stationed in South Korea back home at some point.

If the US stops joint military exercises with South Korea, it will be a big step forward on the Korean Peninsula. If achieved, China’s “suspension for suspension” proposal, which calls for North Korea to suspend its nuclear and missile activities in exchange for the suspension of US-South Korea military exercises, would come to reality. A new leaf will be turned over.

With a cooling down of military activities, less US military participation, and possibly an eventual US troop withdrawal, the peninsula will completely walk out of the shadow of the Cold War. If political process moves toward this direction on the peninsula, the whole region will benefit.

These will be natural developments once the North Korea nuclear issue is completely resolved. Since the “North Korea threat” no longer exists, there will be no grounds for the US and South Korea to continue large-scale military drills and for Washington to maintain its military presence in South Korea.

Public opinion in the US and South Korea were doubtful over whether North Korea would actively implement any agreement reached. But the main obstacle to the peace process of the peninsula in the future may come from Washington and Seoul, or even Tokyo. Right after the summit concluded, Western media criticized that Trump received nothing from this meeting. There are also voices claiming that the cancelation of US-South Korea joint military drills is a victory for China and North Korea.

Public opinion in the US has long harbored hostility against Pyongyang. Lawmakers and opinion leaders can find endless excuses to oppose the Trump administration interacting with North Korea. These forces will bridle Trump and Kim in pushing forward their agreement.

Pro-Washington forces in South Korea see the US troops stationed in their country as a cornerstone of South Korea’s security and would like to see joint military drills to continue. They may not wish to see the US cut its military presence in the peninsula.

Japan has particularly mixed feelings toward harmony on the Korean Peninsula. For Tokyo, hawkish US policy will add to allied Japan’s weight and boost Japan’s strategic value.

After dealing with North Korea for a few rounds, Trump’s team has developed a more realistic mindset on the issue. But his domestic foes probably would rather mess everything up, prioritizing embarrassing Trump above protecting the long-term interests of the US.

Trump and Kim have an opportunity to create history. If Trump can realize complete denuclearization of the peninsula, and Kim can bring prosperity to North Korea, it will be great feat for both of them.